Urea: Will the latest Indian inquiry break from routine?

For the fourth time in the second half of 2019, India will hold a urea purchasing tender. The tender closes 14 November and requires shipments to 19 December.

Over the last few tenders, a well-rehearsed script has emerged with China an active seller, taking a significant portion of the awards. Arab Gulf producers have accepted L1 netbacks and offloaded spot availability. Beyond the FSU producers, participation from western-oriented producers has been limited.

The upcoming tender bears the hallmarks of the above with many in the market anticipating a rerun. However, any restraint from Chinese producers could create opportunities for suppliers elsewhere, potentially stalling the continuous erosion of global urea prices.

In China, a weak domestic market and the weakness of the renminbi has led suppliers to seek export business. In the last three Indian purchasing tenders, China has supplied 50% of the 3.7m. tonnes purchased.

Notably, around the 1 September import tender, through which China supplied 1m. tonnes, the Renminbi stood at Rmb 7.17 against the dollar, having softened from Rmb 6.85/$ in early July. The Renminbi currently stands at Rmb 7.00/$.

In each of the tenders in second 2019, the cfr price has been lower than in the previous tender, but nonetheless Chinese participation has been sizeable. 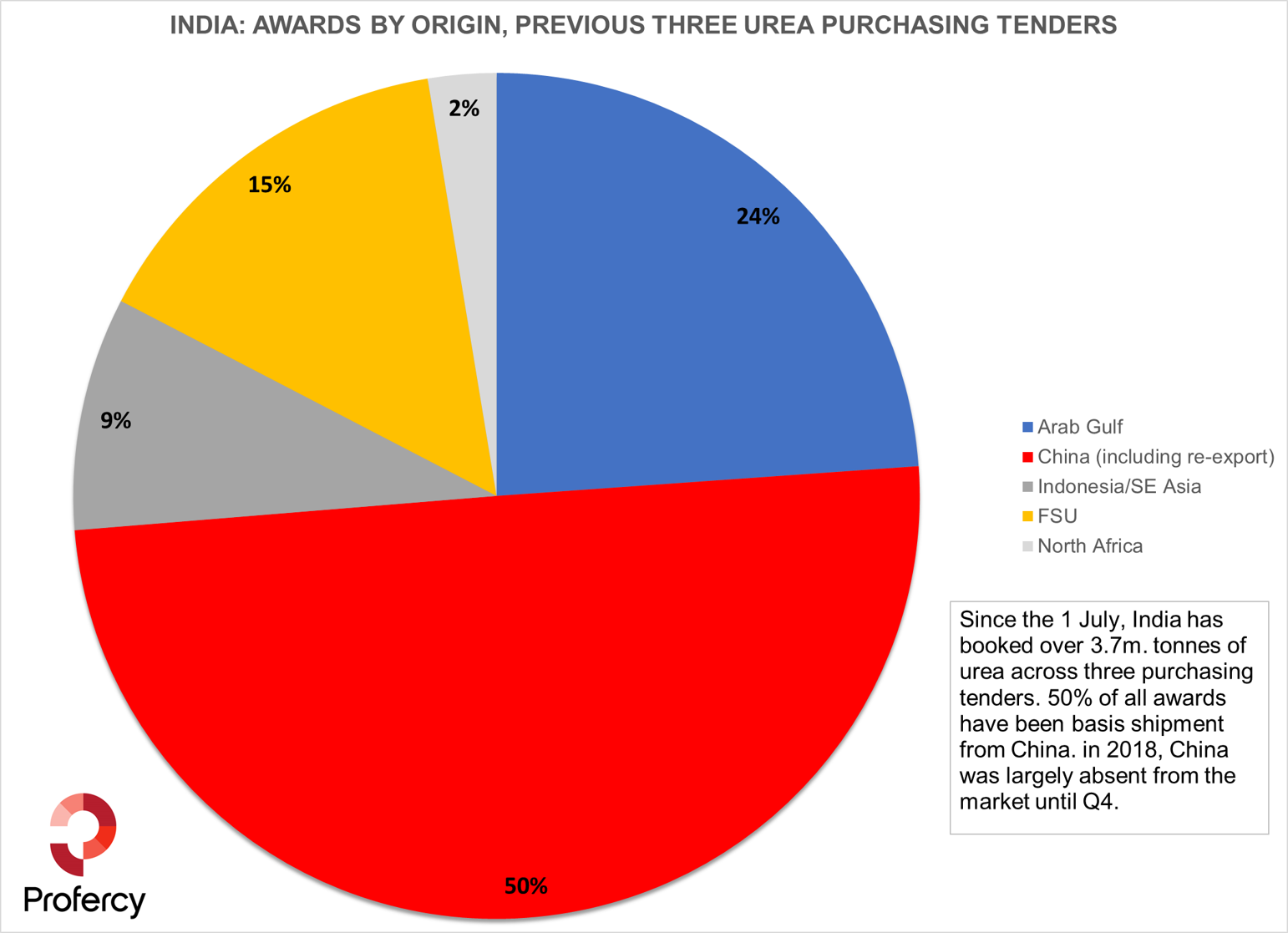 Dollar returns for Chinese suppliers have fallen around $30pt since the July tender. Netbacks in the 14 October tender were no better than the low-$250s pt fob, at the time the Chinese lowest fob prices in evidence since September 2017. Offers in the next tender are expected to be lower, but the market is divided as to the level at which Chinese export are cut back.

Any signs of export restraint from China will offer opportunities for other suppliers. Similarly, should India target over 1-1.2m. tonnes in this inquiry, doors will also open for producers in the west. At present, the latter is not assured, with India expected to instead return mid-December.

Arab Gulf producers have been absent from spot markets for weeks. With the latest tender widely anticipated and netbacks in the west poor, producers have held back November production for India. Meanwhile, FSU suppliers are once expected to commit a handful of cargoes having offered at the most competitive levels in the October inquiry.

One of the key barometers for the market going forward will be participation from North African suppliers. Only one cargo has been committed to India in the past three inquiries, but more than 200,000t were shipped in May-June. This limited supply to other markets and supported a $30pt price increase for Egyptian granular urea over a six-week period. With western markets insufficient to sustain prices, Egyptian fob levels have dropped more than $30pt since the beginning of September. Should suppliers be presented with an opportunity in India, they may well take it, even if this means cutting prices to place December shipments.