Uncertain summer ahead for nitrates as bullish sentiment cools

After two months of uninterrupted and sharp price declines which brought international ammonium nitrate prices down to historic lows, the market rebounded in early June with prices up around $20pt over the last few weeks. The reversal was so stark that almost overnight it was now producers that were looking to delay the pricing of contract cargoes in view that values were likely to continue increasing.

However, over the past week, the near term market direction has started to look far less certain. 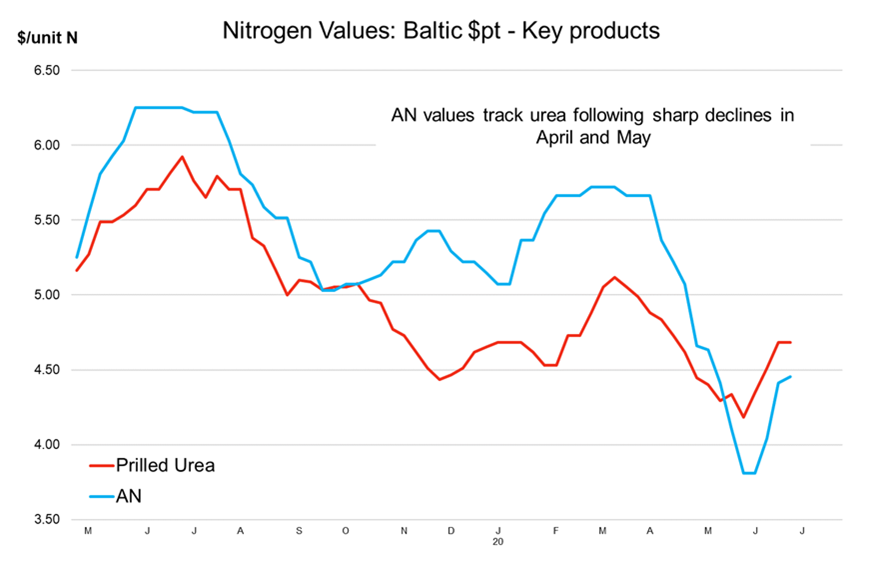 The rapid increase in AN values was due to a combination of factors. First, Baltic fob levels were down to around $130pt fob by late May and were at historic lows. Indeed, prices had declined around $65pt over two months. This fact did not go unnoticed in Central and South America where buyers stepped up to secure summer requirements earlier than they would have otherwise. This collective rush to buy opened up significant sales opportunities for Russian suppliers, including Eurochem and Uralchem.

Secondly, the sharp decline in fob levels translated into equally low summer fill levels for domestic Russian buyers. Domestic buyers took maximum possible length in most cases. It is worth noting that due to Russian regulation on the storage of AN (limiting storage in any one warehouse to no more than six months), buying was not in significant volumes. However, it did offer an outlet for several smaller scale producers.

Thirdly, and perhaps most significantly, global urea markets started to rebound. Indeed, during the first few weeks of the rebound, per unit N, AN’s discount to urea was stable even as the outright price gained.

Looking into July and August, it is now the above mentioned factors that are causing an uncertain outlook for nitrates. In Latin America, a large part of summer AN requirements have been satisfied. Similarly, Russian domestic buyers have secured nearly as much volume as is possible for now. Indeed, the Russian domestic season is 3-4 months away and producers must continue to chase export business until then. In addition, timetables of turnarounds have yet to be finalised and shared with the market.

Finally, in the aftermath of the latest Indian tender for urea, the near term future of global urea markets look uncertain with Chinese suppliers accepting lower fob levels for India. Elsewhere, cfr prices in Brazil had gained by around $35pt over a few weeks prior to the Indian tender. In the week immediately after the tender, cfr prices edged lower and while it is too soon to tell if this is a temporary easing or something more fundamental, the bull run has at the very least been slowed.