European nitrate producers look to emerge from the summer harvest period with a buoyant global nitrogen complex led by the recent rallies in urea prices. Indeed, despite August being the slowest month of the year in terms of activity for European nitrates, producers have moved to increase prices.

This week Yara announced a new price of €245pt bulk cpt for October deliveries of YaraBela Extran (33.5%) in France. The new price is €7pt above the price announced first half July for September deliveries.

Rolling monthly price increases of around €2-3pt are typical and expected but the rally in urea prices, up over $60pt since late May (Egypt fob), has made European nitrate prices appear cheap. Though the two types of buyers are clearly distinguishable, producers aim to keep nitrate values loosely in line with urea.

The difficulty is managing the price volatility of urea. In many ways, the recent urea bull run has come at the wrong time of the year with European nitrate demand in the offseason. During this period distributors and retailers typically secure a portion of their spring application requirements. For nitrate producers increasing prices sharply now would risk harming long term relationships should urea values fall at a later date. Producers risk coming under significant pressure to cut prices if the relative value of nitrate is undermined.

Therefore, with the inability to fluctuate prices, nitrate producers in Europe must effectively manage gradual increases into spring.

2019 was a clear example of the difficulty in doing this. In France, the last price announcement for AN was on 16 July 2019 which put AN prices at €285pt cpt bulk. This was followed by declining urea values throughout much of 2H 2019. Eventually, in an effort to stimulate demand, prices were cut to €245pt cpt bulk in mid-January. A similar situation unfolded in Germany with CAN. 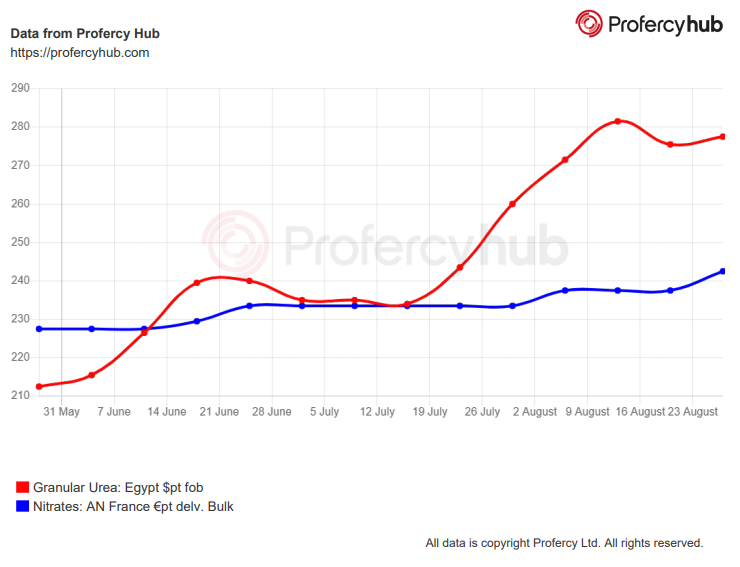 European nitrate producers have adopted a cautious approach to pricing in the offseason despite major price advances for urea.