Chinese caprolactam grade ammonium sulphate prices have now been on an uninterrupted price rally since mid-June, gaining from the mid to high-$80s pt fob to $110pt fob (paid) this week. Over that time, prices have gained nearly every week. The rally is unprecedented for amsul which tends to flatline for significant periods of time, making only modest adjustments.

The firming nitrogen complex, led by urea, has been a big factor. Specifically, the rally in Brazilian urea cfr values, which have increased by $30-40pt from the mid-$240s pt cfr since mid-June, has made compacted amsul attractive in terms of price. Indeed, Chinese compacted amsul prices in Brazil rallied from the mid-$110s pt cfr to the mid-$140s pt cfr over the same period. Brazil has been importing ever increasing volumes of Chinese amsul. 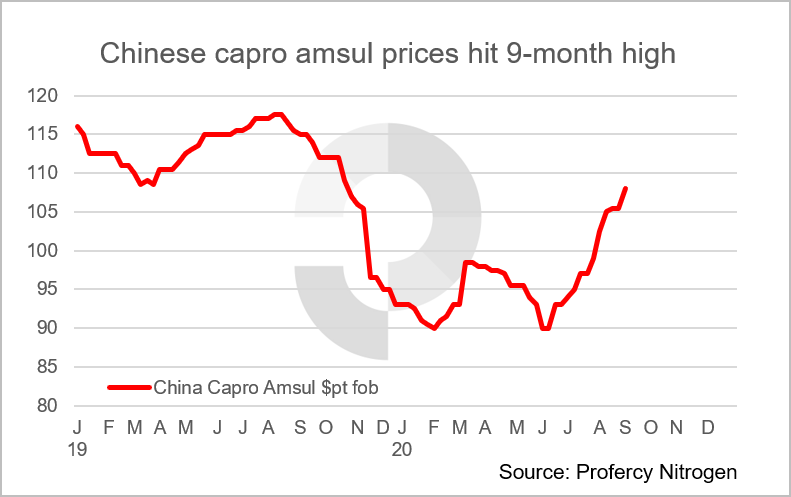 In addition, SE Asian demand for standard capro amsul has been significantly higher. According to the official export statistics, between January-July, China exported a combined 1.66m. tonnes to Vietnam, Malaysia, Myanmar, Philippines and Thailand. This is an increase of 551,000t on January-July 2019 and compensates for the reduced demand for Chinese amsul from Indonesia (down 290,000t year on year).

The lower Indonesian demand is in large part to a change in Gresik’s purchasing methods. The buyer has halved the contractual shipments in favour of spot purchases via tenders as and when the product is required or when prices are deemed advantageous.

In July and August, back to back tenders were announced from the above mentioned countries, including for Gresik in Indonesia, for August and September shipments.

The above factors have meant no let-up in the price rally for capro amsul in recent weeks. Indeed, Chinese compactors have committed the bulk of the production forward into Q3 and Q4, meaning that domestic demand for feedstock standard grade product should continue in the short and medium term.

For the latest news and analysis on the nitrogen market, including global amsul prices, please sign up for a complimentary trial of the Profercy Nitrogen Service.

PWNI makes largest gain in over three years with urea prices in the US up 25% while Egyptian urea values advance 16%
January 15, 2021