Having been offered over 3.6m. tonnes of urea in RCF’s purchasing inquiry two weeks ago, India’s Department of Fertilizers has given clearance today for a record purchase of 2.184m tonnes. State purchasing agency RCF has since issued LOIs to suppliers for the business.

To date, the world’s largest importer of urea has never purchased over 2m. tonnes in a single tender, the closest being in November 2018 when 1.83m. tonnes were booked by MMTC.

The latest tender has been impacted by delays, reportedly a result of having to secure the finance required for such a large purchase. On 19 October, RCF requested a validity extension to 21 October from the 11 companies that had originally confirmed volumes. This was then extended by a further two days and had resulted in nervousness amongst market participants over whether India will be able to clear the length seen in the urea market.

The delay has now reduced the shipment window for loading to just over three weeks. The short shipment window could put a major strain on both Indian port logistics and also Chinese ports as traders potentially scramble to move volume on time.

Little business has been concluded in the global market over the past week as a result, with most buyers opting to wait until awards were confirmed from India in spite of lower offers from some producers in the Baltic and Egypt.

In the east however, Chinese suppliers have raised offer levels to $268-270pt fob and above for prilled urea. Price ideas have recently been bolstered by improved domestic demand, driven by increased raw material demand from the blending sector in the north, as well as lower operating rates which are now below 70%.

Ameropa also looks set to supply the biggest ever volume in an Indian tender from one participant, with the trader expected to ship up to 860,000t of urea in this tender.

At this stage, around 1.2-1.3m. tonnes are believed to be lined up already from non-Chinese origins, including up to 600,000t from the Middle East. However, the balance would be required from China.

This clearing of inventory could encourage producers to raise offers for November shipments, although the success of this partly hinges on major demand surfacing from western markets, including Europe and Brazil. Thus far, these markets have been unfazed by developments in the east. Brazil has a good import volume booked but will need to secure major tonnage in November and December for the safrinha season. Europe has more time with spring 5-6 months away. However, product will need to move earlier to load up the distribution system.

A potential negative acting against price increases is that India’s huge purchase could give the World’s largest importer the flexibility to delay the next inquiry, potentially missing further November shipments. India skipped tendering in September which deflated the market; Egyptian granular prices fell 11% from the peak while Brazil saw cfr prices slide by $20-25pt.

The big question now is whether India can defer the next tender to next buy December shipments. In part this will hinge on how rabi (October-March) demand develops. The major sales months of November-February are ahead with the Indian government forecasting a modest increase of 1-2% over last year. This would compare with a 16% increase in kharif (April-September) and some question why demand growth, in what is normally the largest season for sales, will not exceed the government’s conservative estimate. 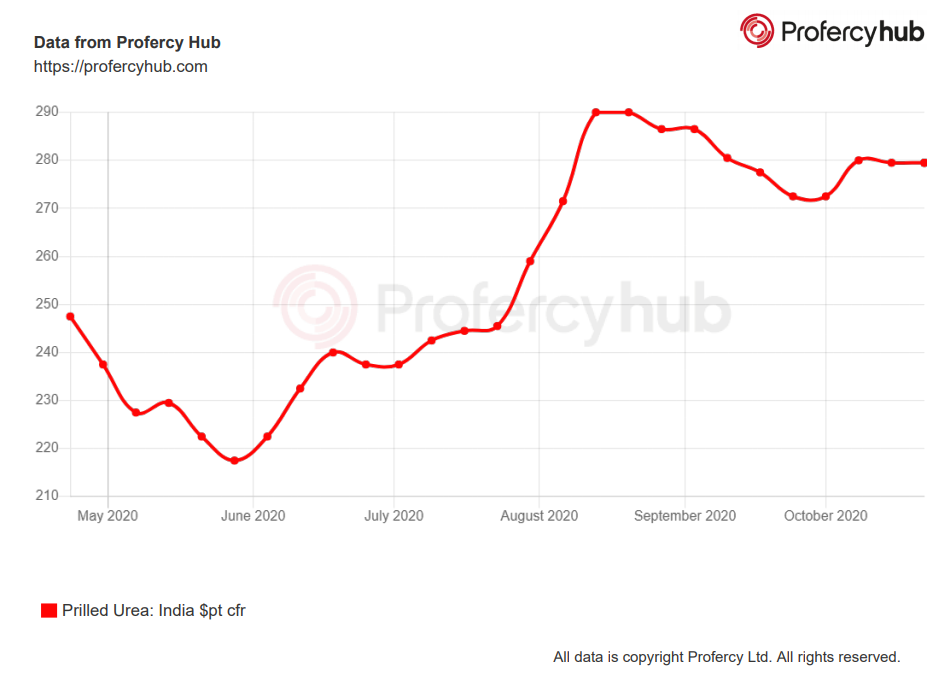 India’s absence from the market in September deflated the market; Egyptian granular prices fell 11% from the peak while Brazil saw cfr prices slide by $20-25pt.