Following four weeks of advances where the Profercy World Nitrogen Index increased by nearly 10 points, the index has this week fallen by 2.42 points to 119.98, with urea values declining in the west and Middle East.

With India’s state purchasing agency MMTC issuing LOIs for close to 1.3m. tonnes of urea late last week, activity in the global market has been muted. This has lead to lower urea values in a number of regions this week as suppliers looked to clear the balance of December availability.

In the US Gulf, with market participants focused on phosphates, there has been limited urea trading. December barge prices have fallen from a high of $251ps ton fob Nola last week, down to the low-$240s ps ton this week. Spot import discussions have started to take place for Q1 arrival.

Brazil has imported a record volume of urea this year, but buyers have adopted a cautious approach of late with many importers sensing that international urea values may now soften. Indeed, this has led to business being focused on small volumes with traders accepting bids sub-$280pt cfr for December shipment in recent days.

At the producer level, business has been slow in the West with only small volumes selling ex-Egypt. Algerian and Russian granular urea is still available for December. Eastern producers are committed for December, but there have been signs of prices easing in the Arab Gulf for January.

The one region bucking the overall trend this week is China, where prices have increased. Supply cutbacks and the emergence of some domestic demand for Spring, has supported domestic values. Producers have shown little interest in export business, and those that are have increased offers for both prilled and granular urea to $290pt fob, up by over $10 from last week. 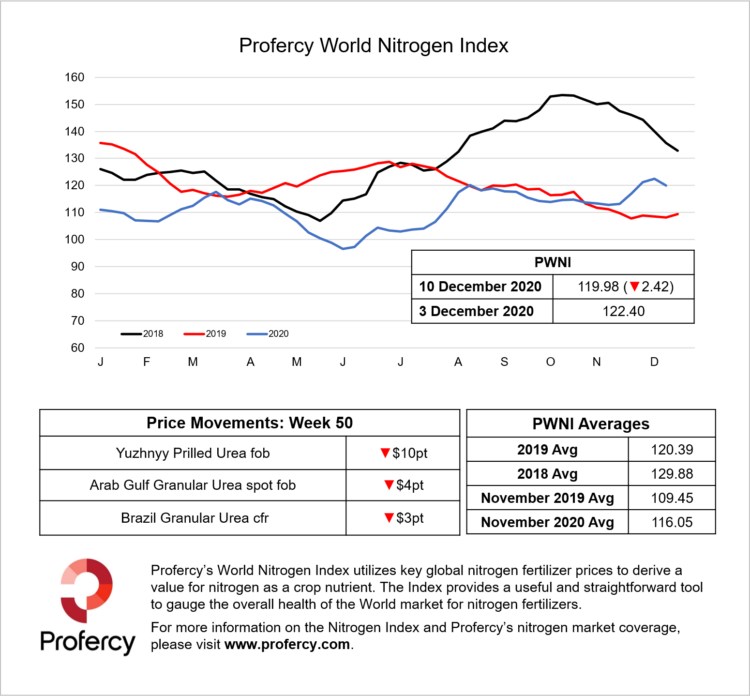