As expected, UAN production fell sharply as the producer faced very poor returns from the USA for much of the year and was effectively blocked out of the European markets due to anti-dumping tariffs. In 2020, UAN output was 1.10m. tonnes, down 37% year-on-year from 1.73m. tonnes.

Meanwhile, AN output increased by 25% year-on-year to 2.43m. tonnes while in-house consumption of AN declined 48% to 213,000t. As a result, commercial AN availability increased from 1.54m. tonnes to 2.22m. tonnes, up 674,000t or 44%. The bulk of the new availability has been placed domestically with Russian AN demand running 10% higher overall year on year. Russian demand has been increasing substantially over the last few years, albeit from a low base.

Overall, nitrogen fertilizer output declined 5% year on year (excluding ammonia) to 4.71m. tonnes with in-house consumption declining by 39%, primarily as a result of the UAN cutbacks, to 690,000t. 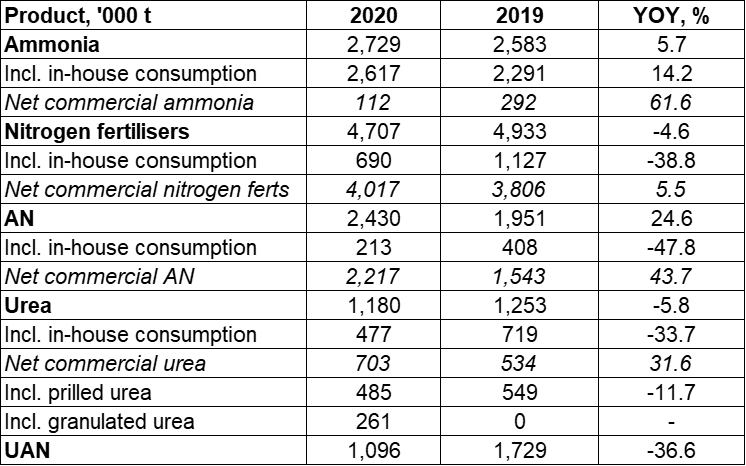 EBITDA excluding special items meanwhile, declined to $511m, from $525m a year earlier, while European gas (TTF) prices rose over the period from $3.70/MMBtu in Q4 2019, to $4.50/MMBtu in Q4 2020. However, the producer notes that its increased deliveries and production have offset the impact of higher energy prices.

Yara estimates its Q1 gas price in Europe at $7.10/MMBtu and $6.40/MMBtu for Q2, compared to last year’s comparable figures of $4.30/MMBtu and $2.80/MMBtu. Q3 gas prices were even lower at $2.60/MMBtu, since which recovering demand for gas and seasonal factors have seen a major recovery in gas prices from the Covid-19 impacted lows of mid-2020.

By Michael Samueli and Neha Popat