With prices for most nitrogen-based products remaining firm this week, the upwards momentum continues to be seen on the Profercy World Nitrogen Index with values reaching close to 175 points, levels last seen over six years ago.

In the urea market, following two weeks of illiquidity in Egypt, sales took place at higher levels by producers for small sized cargoes for shipment into Europe and Turkey. With latest trades taking place at $395pt fob, Egyptian granular urea values have now risen by over $100pt since the beginning of the year.

While demand in Europe has slowed a little, Turkey continues to provide an outlet for traders with March volumes, and offers there have moved closer to replacement values.

In Brazil, buyers are also facing higher offers for March, largely owing to rapid escalation in freight rates. With these up by as much as $10pt in less than two weeks for shipments from the Middle East, Russia and North Africa, suppliers are unwilling to entertain business below $390pt cfr.

After a slow start to the week, values in the US Gulf also advanced after a number of producers entered the market to make purchases. March barge values subsequently advanced late in the week, putting US cfr values on par with Brazil.

In the UAN market, with producers in the US Midwest having scaled back or cut production entirely over a week ago owing to the significant increase in gas prices, US UAN values made sharp gains. Although producers have since commenced production, there are few offers circulating for Q2. CF Industries is not actively offering.

The amsul market also remains firm, with Chinese capro-amsul prices continuing to advance and availability for export limited. While, the rapid escalation in Yuzhnyy ammonia prices of late has resulted in values now at $200pt higher than the lows reached in the middle of last year. 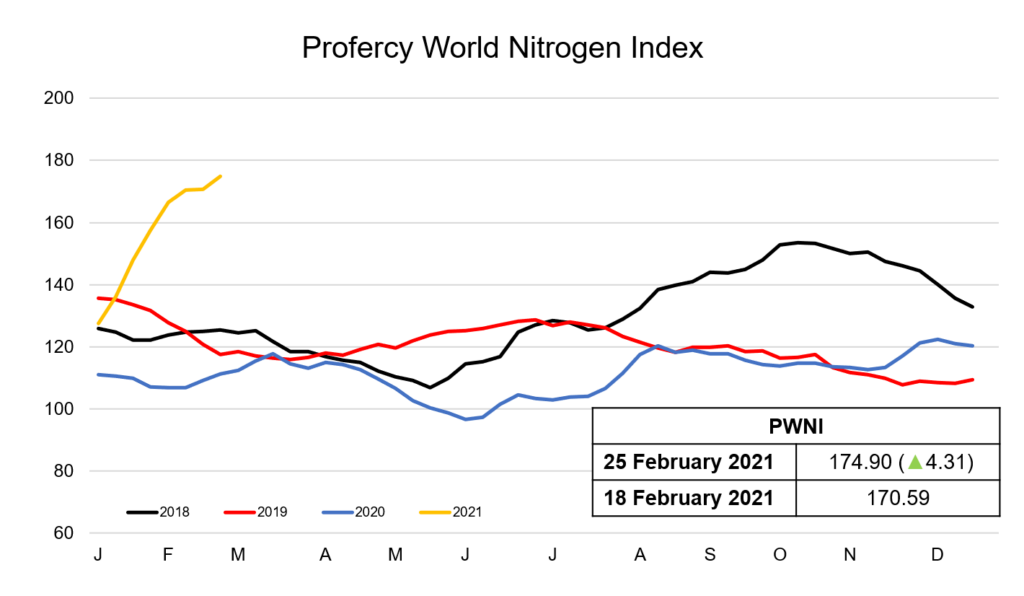