While activity across the global urea market was muted for the most part this week, the US has been the exception.

With freezing temperatures currently being experienced in the country’s Midwest and gas prices sky-rocketing, nitrogen producers have scaled back production. Producers have been able to sell gas back into the market at a notable premium, or have been encouraged to minimise production to free up gas for residential heating and electricity generation.

This resulted in a number of producers entering the market to purchase urea, and Nola barge values subsequently advanced from the mid-$320s ps ton fob Nola late last week to the mid-$350s ps ton fob Nola on Tuesday, making up on the losses seen the previous week.

Although at this stage the US production losses are not massive, the situation could become more problematic if affected plants are slow to restart once warmer weather returns. The situation is more pronounced in the UAN market. This is particularly given the shutdown of the IFCo Wever facility, with a nameplate capacity of just below 1.5m. tonnes/year of UAN, and with CF Industries reportedly scaling production at facilities in Oklahoma capable of producing 2.5m. tonnes/year of UAN.

Returning to urea, demand continues to be seen in Turkey, with inquiries for up to 30,000t of granular urea for March onwards shipments emerging this week. While in some European locations, small volumes were sold at last done levels. March availability appears tight for shipments from Egypt, with producers sold and traders committed for much of the month.

The rest of the urea market has been muted, with public holidays in China and Brazil leading to limited levels of activity both east and west, and prices remaining stable across the board.

Owing to the inactivity across most of the urea market, the Profercy World Nitrogen Index has remained stable this week, edging 0.25 points higher to 170.59. 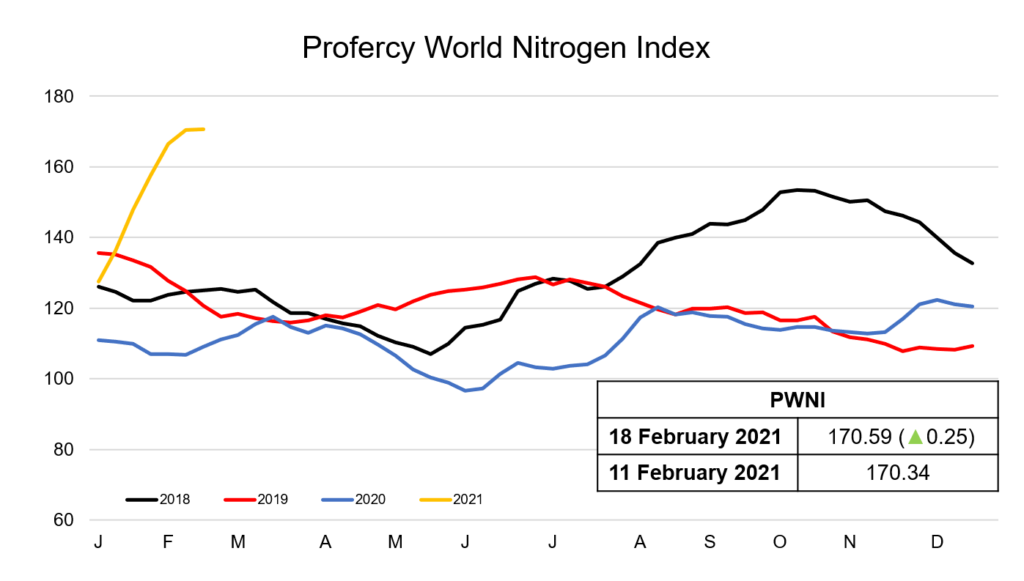