The country’s state purchasing agency RCF is set to close the tender on 22 March for shipments to 28 April.

For the most part, activity in the urea market was muted this week as participants await the outcome of the first tender of 2021, with uncertainties surrounding how much will be booked and at what cost. Adding to the complexity in this tender is the volatile freight market, with rates having rapidly escalated since December and changing frequently.

1.273m. tonnes was booked by India in the last tender on 1 December. This followed a record purchase of 2.184m. tonnes in the tender prior to that in early October. However, after a lengthy gap between this latest tender and the previous one in early December, it is thought that at least 1m. tonnes will need to be targeted by India.

The last purchasing inquiry saw volumes booked for the east coast at $286.50pt cfr and west coast at $284.77pt cfr. However, with urea values having rapidly escalated since the beginning of 2021, offers in the $380s pt cfr could easily be possible, levels that haven’t been paid by India in an inquiry since April 2013.

While activity was mostly limited in the urea market this week, the exception was in the US Gulf which experienced a volatile week.

With Nola urea barge values last week having hit highs that were last seen almost seven years ago, the severe weather in the US has stalled upriver demand for urea barges, and values declined throughout the week.

Meanwhile, values in Brazil climbed higher, with a lack of offers now being received by importers owing to more shipments being committed to the US, as well as eastern producers anticipating better returns in India. Both prilled and granular export offers from China have also now risen in anticipation of the tender.

Values of other nitrogen-based products remain firm and have continued to push the Profercy World Nitrogen Index higher. Values in the ammonia market continue to rapidly escalate, with a shortage of material forcing buyers to pay the premium. With Russian export cutbacks expected in April during a period of healthy demand, further price increases are expected in the weeks ahead.

The Profercy World Nitrogen Index has gained 1.58 points to 184.53 this week, remaining at levels last seen in March 2014. 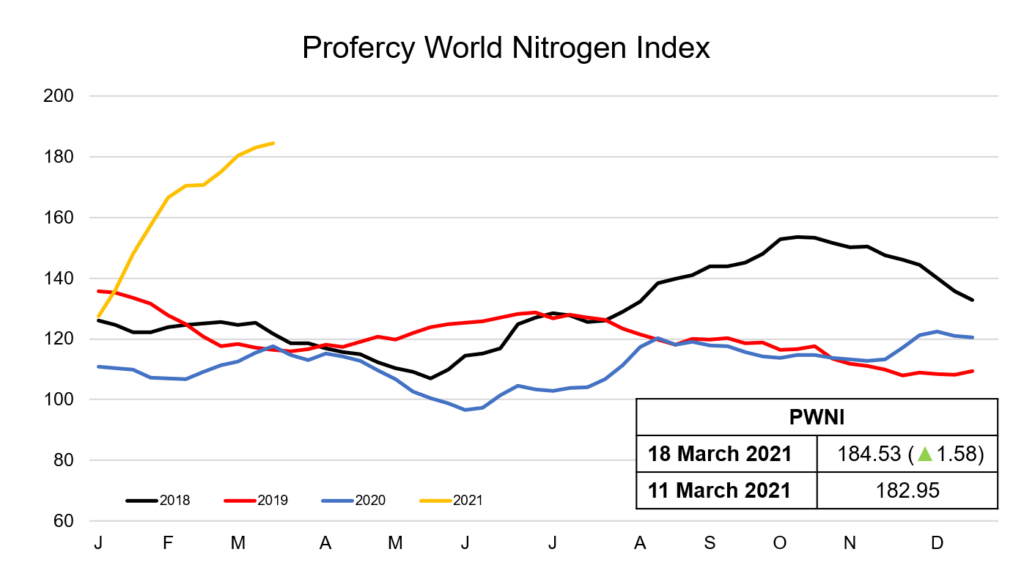