The Profercy World Nitrogen Index has climbed further and continued in the same manner seen since the beginning of 2021, with urea values making gains across several regions this week.

The one exception was China, where export values for both prilled and granular urea came under pressure earlier this week. With domestic demand remaining slow and no firm news from India regarding a new purchasing inquiry, producers cut offers by around $10-15pt from last week in order to place March and April availability.

This led to Chinese urea being committed to Latin American markets at prices well below what is possible from other origins. However, with a number of domestic distributors and traders purchasing significant volumes, offer levels improved later on in the week.

The rest of the urea market remains stable to firm with prices holding steady or extending gains in some cases.

In the US Gulf, with prompt availability tight in the region a number of big distributors were active buyers in the market. This led to March barges rapidly advancing and hitting $400ps ton fob Nola midweek, highs that were last seen in April 2014. New highs were hit later on in the week with prompt/loaded barges trading $2.50ps ton higher.

Egyptian granular urea prices also reached a milestone, with a significant volume sold for May shipment at $400pt fob. Granular values from Egypt have now gained by over $100pt fob since the beginning of the year.

While activity was significantly quieter this week from North Africa, with demand expected to surface shortly from Turkey and Latin America, producers remain confident and continue to hold offers at current levels.

After several weeks of inactivity in the Arab Gulf, a granular urea cargo was sold for April shipment at $365pt fob, in line with last done business from the region.

Having undergone significant increases last week, US UAN values remain around these high levels. While in the AN and ammonia markets, prices are also firm with availability remaining tight.

The Profercy World Nitrogen Index has gained 2.68 points to 182.95 this week as a result, remaining at levels last seen in March 2014. Since the beginning of the year the Index has climbed by some 55 points. 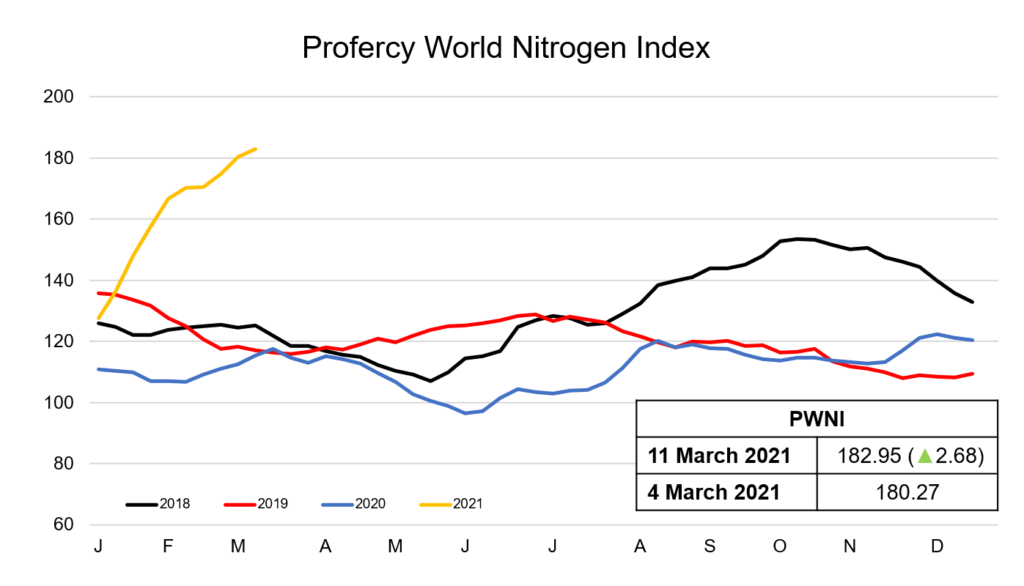