The Profercy World Nitrogen Index has declined for the third week in a row as urea prices continue to soften in most major regions this week. Having made rapid gains since the beginning of the year and in the run up to spring application in western markets, the Index has now fallen by over 10 points in three weeks.

While many had anticipated softer global values for May shipments, the pace of price decline has been accelerated by India’s decision to book just over 800,000t of urea for shipment by 28 April. In the tender, RCF had received confirmations for a greater volume, 1.332m. tonnes. The confirmations exposed the near 1m. tonnes of availability out of China for shipment this month. Only half of this was committed to India.

Indeed, with domestic demand slow and operating rates high, Chinese producers and traders with prilled urea originally intended for India have now sharply cut export offers in an effort to offload volumes. Lowest offers declined to the high $320s pt fob, down some $20pt from last week. Granular urea has been offered at increasingly competitive levels against soft inquiry in Latin America.

Heading west, producers in Egypt have also had to lower their aspirations with offers down to at least $370pt fob, a $30pt decline from the multi-year highs that were reached over a month ago. However, a wide gulf has erupted between buyer and producer price ideas despite the reduction in producer offer levels. Buyers are no longer willing to pay above $350pt fob with only soft interest noted.

With demand from Europe and Turkey muted, traders with North African positions have been looking at markets across the Atlantic to place tonnes. Vessels have already been booked for the US and Brazil, the first shipments heading to these markets from Egypt this year.

In the US Gulf, while prompt and loaded barges continue to trade at a notable premium, deferred values have come under pressure. 1H May barges traded at $362ps ton fob Nola this week, almost $40ps ton below where loaded barges changed hands.

In Brazil, the situation is arguably worse for suppliers. Buyers have almost completely withdrawn from the market and await indications that prices have bottomed out. This is the case across most nitrogen products including urea, ammonium sulphate and ammonium nitrate. Suppliers are wary of chasing the market down especially for the latter two products. Urea offers declined to around $380pt cfr by mid-week. Offers had peaked around $45pt higher in mid-March.

The RCF move to book minimal tonnes has come at the end of the spring buying period across Europe (east and west) and the USA. For ammonium nitrate, this has been especially pronounced. With domestic demand almost dropping off a cliff edge, values are at around a $50pt discount to export levels. In December, domestic values were trading at a substantial premium to export.

Owing to the limited activity seen across the nitrogen-based complex, the Profercy World Nitrogen Index has declined 3.93 points to 174.04 this week. 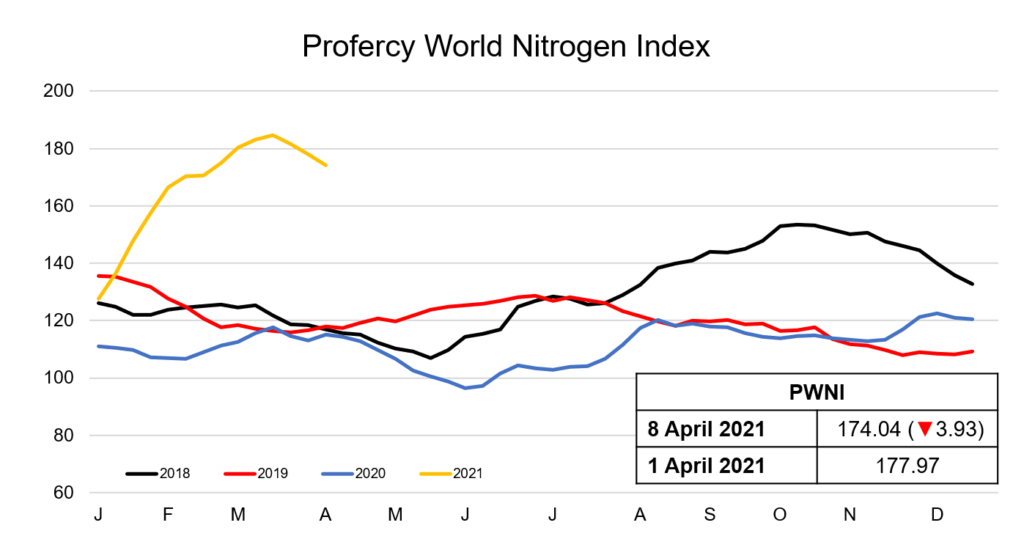