The Profercy World Nitrogen Index has fallen lower this week, although the losses have not been as vast as in recent weeks, with urea values mixed across the different regions. Values in the east have held, while latest North African business saw lower fob prices in the west.

Market participants continue to await an announcement from India regarding a new urea purchasing tender. MMTC is still expected to announce a tender for May into June shipments, however with Covid-19 currently causing severe disruption in the country, there are concerns that the tender could now slip into early-May.

In the east, prilled and granular urea values were stable. Producers and domestic traders in China adopted a firmer price stance this week, to the benefit of others in the region.

With agricultural demand improving, ex-factory quotes advanced by Rmb 30-40pt for prilled urea in several locations. Inventory pressure has eased for the time being and many Chinese suppliers expect that India will provide a decent export outlet for May and June shipments.

Consequently, prilled and granular export quotes increased with prilled values returning to the $330s pt fob. With domestic demand set to ease in June, many do still expect supply pressure to build and export interest to increase towards the middle of the year.

Demand in much of Asia has been relatively slow, but spot business has taken place for shipments to Australia in the past week (ex-Indonesia). While, Thailand is taking notable volumes of urea ex-Middle East and SE Asia ahead of peak domestic demand in June-July. Supply cutbacks in Saudi Arabia have seen volumes committed from Indonesia for May.

Heading west, Egyptian producers committed large volumes for May shipment this week, with traders stepping in to cover earlier sales into Europe and Turkey, and a number of cargoes also committed to Latin America. While late last week trades were taking place in the $330-335pt fob range, with demand improving latest business has taken place as high as $348pt fob.

In the US Gulf, prompt/loaded barge values have held at high levels, over $380ps ton fob Nola owing to concerns over late vessel arrivals into Nola, as well as lengthy delays unloading vessels once in port. However, deferred values still remain at a significant discount, with minimal demand currently being seen for barges from May onwards.

The latest round of physical business in the west and the stability in the east has led to a recovery in derivatives values. Having dropped as low as $320pt fob, May Arab Gulf contract values have traded up to $340pt fob with buying interest evident just above this level late yesterday. Derivatives values had previously been at a notable discount to near-term physical values.

The Profercy World Nitrogen Index has declined 1.31 points to 165.71 this week, the fifth consecutive week the Index has made losses. 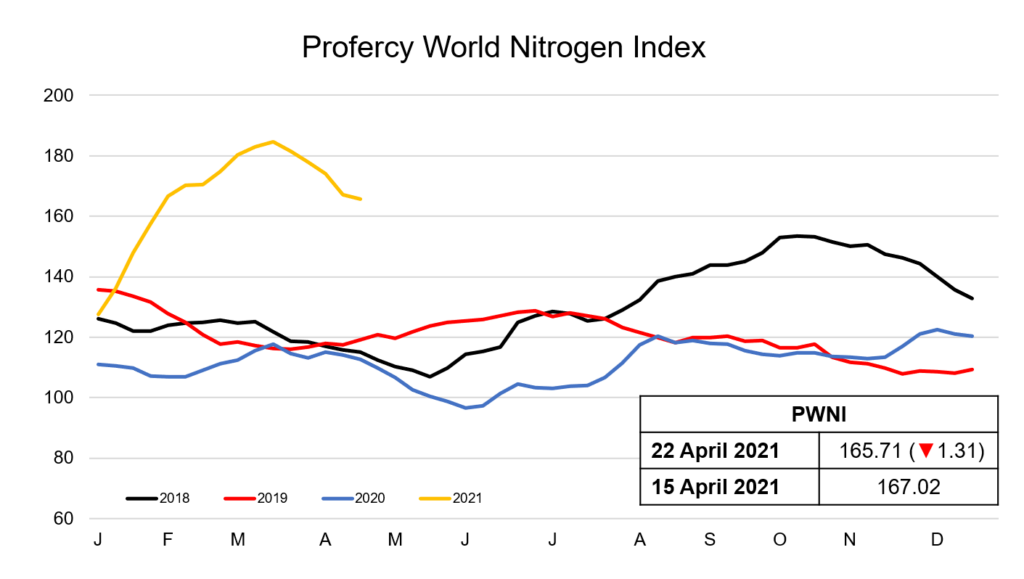