Following last week’s gains, the Profercy World Nitrogen Index has declined by over 3 points this week. The international market was understandably focused on the outcome of the latest Indian purchasing tender.

India’s state purchasing agency MMTC closed the tender on 4 May for shipment by 21 June. The lowest offers for both the west and east coast, at $358.99pt cfr and $356.99pt cfr respectively, were more than $20pt below those in the previous tender. While offers were received for a total of around 2.2m. tonnes of urea, MMTC moved to secure just 550,000t on 7 May.

Chinese suppliers opted to skip the business with east coast offers, reflecting below $330pt fob, considered unattractive. With volatility also continuing to be seen in the freight market, many traders also highlighted difficulties in finding vessels for the business. Only one cargo will be supplied from China in this tender as a result.

Values in the Middle East also eased this week, with Indian business reflecting sub-$340pt fob, and latest spot sales taking place in the low-$330s pt fob by producers for shipments in May and into June. Netbacks to the Black Sea also saw values drop to the mid-$310s pt fob for prilled urea.

Heading west, activity in the US Gulf was significantly slower with severe storms in the southern states deterring buyers from making further purchases. Offer levels declined as the week progressed as a result, with May barges trading some $10ps ton lower than business done last week.

Brazil has been bucking the trend seen elsewhere as buyers have accepted the higher offer levels for small volumes. Granular urea trades have taken place over $380pt cfr this week, almost $15pt above cfr values last week. Buyers in Argentina and Uruguay have also been active with the former market securing several Egyptian cargoes in the past week.

Despite the Brazilian increases, netbacks from India lowered fob levels in several regions. The Profercy World Nitrogen Index has fallen 3.42 points to 164.66 this week. 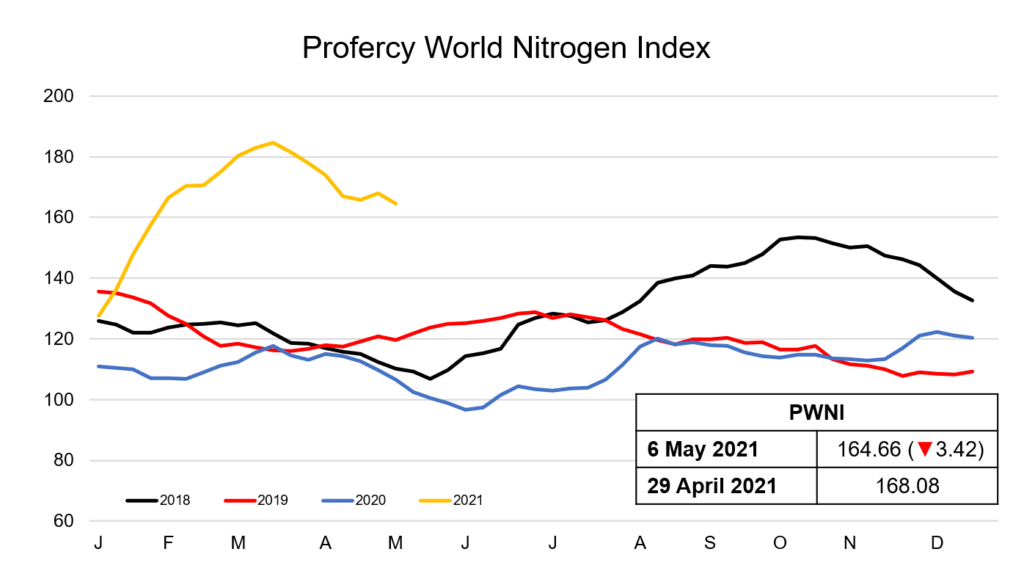