The Profercy World Nitrogen Index increased this week as the urea market sidestepped the Indian tender results in favour of bullish upstream and downstream factors, as well as logistical considerations.

The latest purchasing tender by India’s MMTC resulted in just 550,000t booked. This would have ordinarily been considered a very bearish outcome. Indeed, the last downturn was triggered by RCF booking only 800,000t of the 1.9m. tonnes offered, of which 0.9-1m. tonnes were basis supply from China.

However, in the latest MMTC tender Chinese suppliers opted to skip the business owing to the lower returns, high feedstock costs, and the ongoing freight risks. With one of the major global swing suppliers largely out of the export market, market sentiment quickly turned bullish. In addition to China, commodity values continue to be at multi-year highs and a new Indian tender is expected to be announced imminently.

Export offers in China have risen in anticipation of India’s return and the higher production costs, with prills offered as high as $355-360pt fob this week, from the high-$330s pt fob heard late last week.

In North Africa, demand emerged from traders for shipments to Latin America, as well as early purchasing for the European summer restocking season. Egyptian producers were able to take advantage of the improved demand, with some 200,000t of granular urea sold for late May to July shipments. Prices gained $15pt over the week as a result with latest sales concluded at $370pt fob.

Similar increases were also seen this week in Algeria, with reports a urea cargo was sold late in the week at $375pt fob, up from lows of $340pt fob a week ago. Meanwhile, in the Middle East, a trade took place in the low $360s pt fob Ruwais for July loading, a $16pt increase from last done business from the region.

Heading west, demand for prompt barges in the US Gulf has declined over recent weeks, however, deferred values increased significantly owing to the international bullish sentiment and continued strong grains values. A physical barge for Q3 traded this week at $360ps ton fob Nola, reflecting just over $390pt cfr. The high Q3 barge price could see further shipments booked for arrival during the US offseason and compete with Brazil during a time of growing demand in the Latin American country.

Values in Brazil also gained this week as buyers stepped up to secure product and suppliers increased offers in line with the wider international market. Buying interest was seen across a number of regions, and business was heard taking place as high as $395pt cfr, up from the mid-high $370s pt cfr last week.

With global urea values firming, the Profercy World Nitrogen Index has climbed 2.97 points to 167.63 this week. 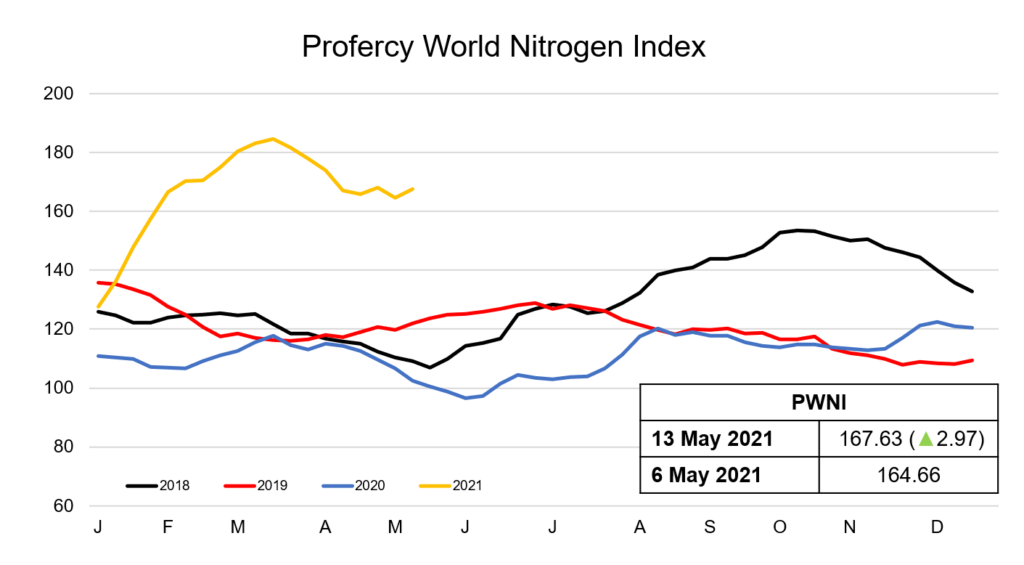