The Profercy World Nitrogen Index has continued its rapid ascent, this week climbing by over 8 points, the largest weekly increase seen since early February, and nearing highs last seen in March this year.

All products across the nitrogen-complex remain firm. Urea values in particular are racing ahead of other nitrogen products and showing no signs of letting up in the near term.

In the urea market, participants were focused on the outcome of the third purchasing tender of the current campaign from India. RCF received offers for 1.49m. tonnes of urea, the lowest volume offered in the last three tenders.

The timing of the tender and the shipment window implied a target of 0.7-1.2m. tonnes, however, after submitting counter offers at the lowest offer levels of $408.88pt cfr on the east coast, and $418pt cfr on the west coast, reports suggest that RCF has today received award acceptances for around 565,000t. It is likely that India will need to enter the market again soon to make up for the shortfall and build up stocks ahead of the upcoming peak seasonal demand.

The presence of India in the market continues to have a positive impact on urea values globally.

In China, producers and suppliers raised price ideas ahead of the latest Indian purchasing tender. Prilled urea offers were heard at $380-385pt fob, up more than $10pt on last week, while granular urea offers were at $395-400pt fob for June/July shipment.

Buoyed by the bullish international sentiment, in the Middle East values have also advanced with offers into the latest Indian tender from two producers at $390-396pt fob. While the low RCF fob counter offer was rejected by the producers, contract business to western markets continues to provide good returns and producers in the region are confident demand from the west will provide outlets for June and July shipments.

Egyptian granular urea prices surpassed the $400pt fob mark, with a large volume sold midweek for August over $405pt fob. The majority of producers in the region are now mostly sold out for June and July, and with demand from Latin America expected to continue, the upwards pressure on prices remains.

Heading west, values in the US Gulf barge market also advanced, with increased demand for prompt material pushing both loaded and May barge values some $34-39ps ton higher from the lowest levels heard a week ago. Values for June also climbed higher, with participants remaining optimistic over demand heading into the US offseason.

Owing to the rapid advance in urea values, the Profercy World Nitrogen Index gained 8.27 points this week to 182.06. This is the third consecutive week the Index has climbed, gaining over 17 points and recouping on losses that were made in late March and April. 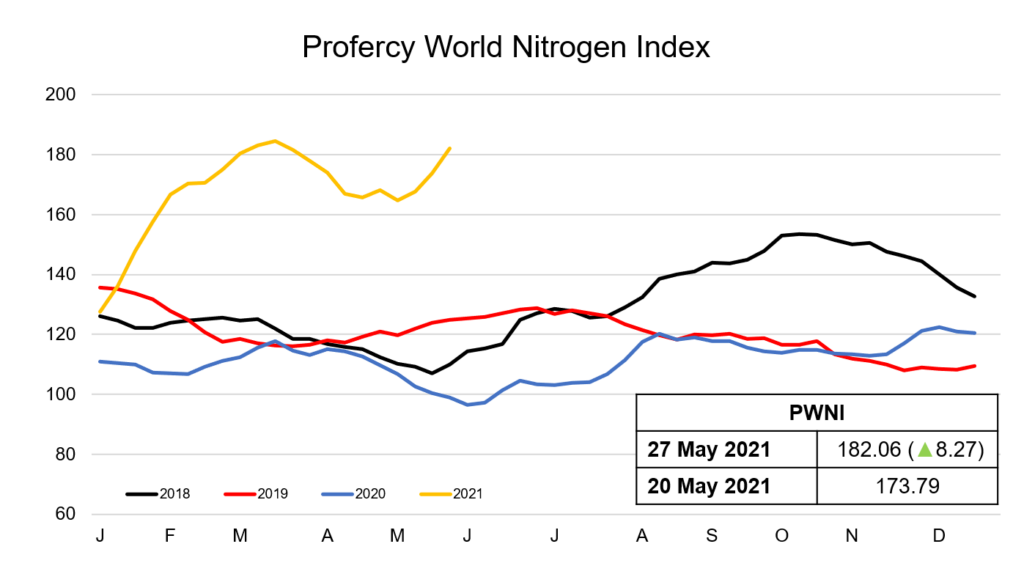