May 24, 2021Leave a commentGeneral, Nitrogen

Last week the Iranian President Hassan Rouhani stated that a broad outline to end oil, petrochemical and banking restrictions had been agreed with the USA and other nations. While the extent of progress in the negotiations is not completely clear, oil markets are already pricing in the prospect of sanctions against Iran easing.

Sanctions on Iranian petrochemical products, first announced in August 2018, completely transformed the trade flow of Iranian urea. The affects were felt worldwide. With the key Indian market effectively blocked, Iranian material was forced to find other markets, selling at a significant discount to granular urea from other origins and disrupting established trade flows.

The easing of sanctions could once again have a major impact on the global urea trade.

2018: The introduction of sanctions

Prior to 2018, existing banking restrictions resulted in Iranian urea not being shipped in notable volumes to many of the biggest import markets, including those in Latin America, Europe and SE Asia. Iranian producers were therefore heavily reliant on Indian business. Iranian material was often offered at the most competitive prices in the various state-backed import tenders.

Official customs statistics show shipments to India totalled 1.71m. tonnes in 2017, more than 50% of total Iranian exports that year. Sanctions began to bite towards Q4 2018, but Iran still managed to supply more than 1.9m. tonnes of urea to India in 2018.

Indeed, after months of uncertainty, it was not until the 5 October 2018 MMTC tender that direct shipments from Iran were effectively blocked. This tender saw the introduction of new requirements on those offering with MMTC documentation stating that “bids with open origin of goods are not acceptable” and that “bids offering material from countries of origin against which sanctions have been imposed / likely to be imposed, shall not be considered and price bids of such tenders shall not be opened”.

Anticipation of, and the eventual introduction of sanctions, were a major bullish driver in Q3 2018 with Arab Gulf granular urea prices shooting up $75pt from the July low to the early-October peak. 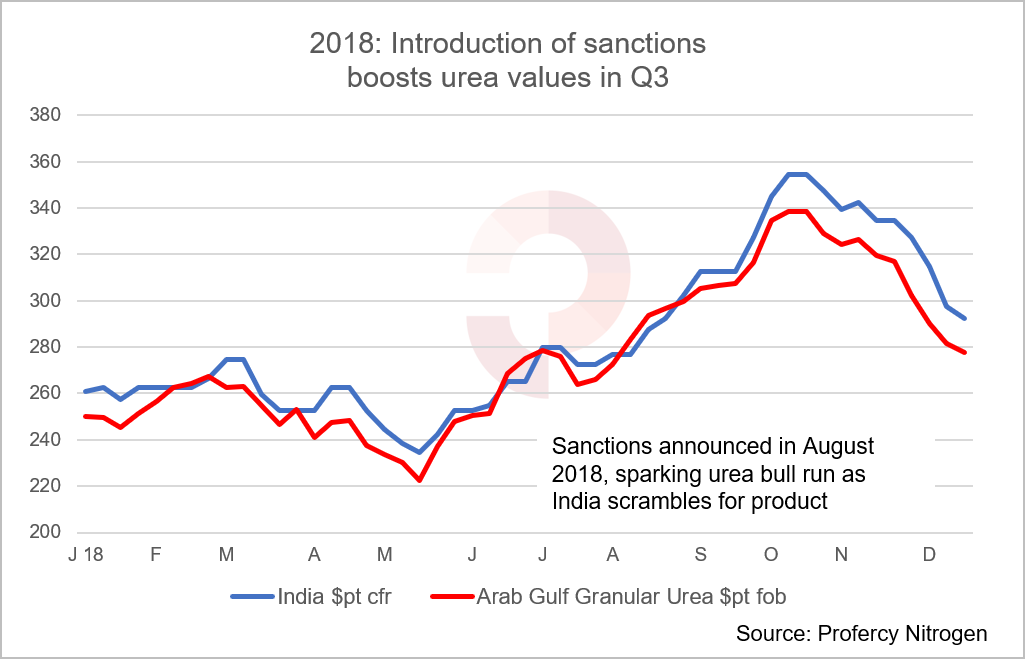 The response from Iranian urea suppliers

Presented with the loss of their main outlet, Iranian producers were initially forced to scale back production and exports, with official figures putting total exports in 2019 at just 1m. tonnes, compared to over 4m. tonnes in 2018. While India was not completely blocked off, with moderate volumes able to be supplied via China or other routes, Iranian material clearly needed to find a home elsewhere. As such, sanctions forced the diversification of trade flows from Iran to countries able to handle the product, albeit at heavily discounted prices to urea from other origins.

Even before the formal introduction of sanctions on 5 November by the US, Turkey emerged as an open destination with President Tayyip Erdogan stating that Turkey would not abide by the sanctions. As a consequence, North African and FSU suppliers to Turkey quickly found their product competing with a huge increase in shipments from Iran. Turkish customs data shows 2017 arrivals from Iran at 559,000t. Arrivals from Iran and Oman (widely accepted as being of Iranian origin) totalled 1.16m. tonnes in 2019 and 1.25m. tonnes in 2020. During this period, imports from Egypt dropped from 1.29m. tonnes to 0.73m. tonnes while those from the FSU also declined to negligible volumes.

While more complicated, Brazil presented another major new outlet with shipments made possible by barter based trade. Trade was briefly disrupted by concerns from domestic fuel suppliers regarding refuelling vessels from Iran. These were resolved in July 2019 with a court order essentially clearing the trade route. Almost no imports from Iran were registered in 2018 by Brazilian customs, but the country has taken more than 0.5m. tonnes/year since.

The impact of sanctions on fob prices

While diversification of trade routes has meant that Iran still has access to the global urea market, this has come at a cost. Iranian product trades at a significant discount to urea not subject to sanctions. Before Q4 2018, this discount of Iranian product to the Arab Gulf fob price was just over $10pt. In India, Iranian product competed at no discount to other origins, but was often a price leader.  In the past month, the discount on an fob basis has ranged from $55-85pt. Clearly, the primary impact has been on returns for Iranian producers. As suggested above, the presence of this discounted product in markets such as Brazil and Turkey, has reduced returns for other suppliers.

Of note, Iranian producers have for much of the past three years ensured they have orders lined up for two to three months’ worth of shipments to minimise the risk of needing to curtail production.

The easing of sanctions: a return to 2017 trade flows?

The direction of travel would suggest that sanctions will at some point in the near term ease on Iran, potentially reopening a number of closed doors, the heaviest being into India. Given that Iranian product previously competed on a level-pegging with other suppliers into this key market, producers will no doubt be keen to regain market share in the world’s largest urea importer. This will no doubt benefit India, which has in recent years found itself heavily reliant on Chinese and Middle East material to meet demand.

However, Iranian suppliers are unlikely to completely give up their share of markets that have opened up since 2018. This includes Brazil, Turkey and Africa. They will likely continue to offer Iran a vital outlet when Indian demand is slim. Given this, an easing of restrictions is anticipated to have a less dramatic impact on global trade flows than their introduction in 2018.

By Chris Yearsley, Director and Editor of Profercy Nitrogen