May 12, 2021Leave a commentGeneral, Nitrogen

Since the start of this year, US Gulf granular amsul values have rallied around $100ps ton and currently stand at a high $270ps ton fob Nola ($292pt cfr metric). Over that period the price has not once reversed any of the previous gains with current prices some $90ps ton above those in Q2 2020. While amsul values have been firm for much of 2021 elsewhere, no other market has seen uninterrupted price gains. Indeed, after a firm start the Brazilian compacted/granular market mirrored that of granular urea and stalled in late March and into April. Granular amsul values reversed gains with prices dropping from $215pt cfr to just below $200pt cfr from late March to late April. 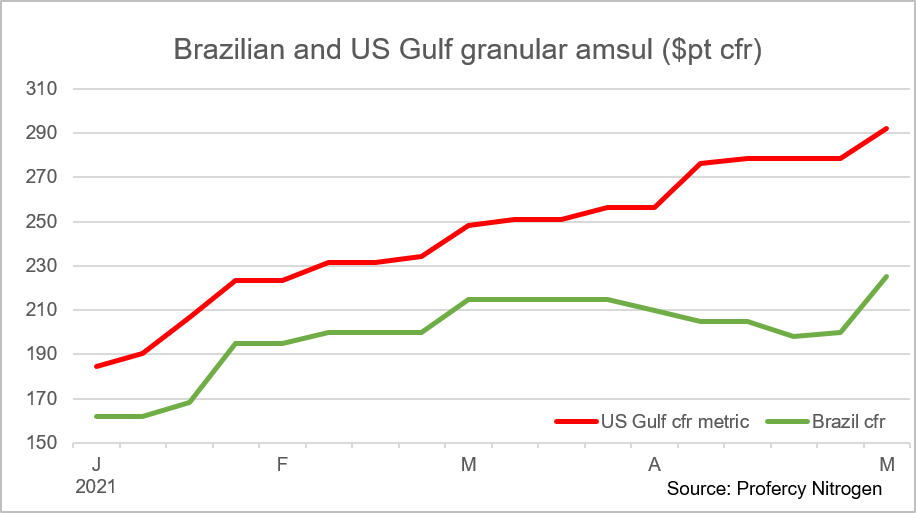 While demand has been healthy, the gains in the US have largely been driven by supply side factors, with contracted imported volumes unable to make up for a shortfall in domestic production.

Significantly, the US effectively only allows the import of European granular amsul. However, European producers commit the bulk of their product on contracts and therefore have little volume flexibility owing to commitments elsewhere. Suppliers, such as Lanxess, have regular commitments to Brazil that need to be fulfilled despite the favourable returns in the US. Q1 imports from Belgium and the Netherlands were 47,000t and 30,000t, respectively. The volumes are similar to Q1 2021 once the December cargo from Belgium which was subject to a delayed discharge is factored in.

In addition, and in stark contrast to Brazil, Chinese supply is effectively banned. Russian compacted amsul is also imported though the volumes are comparatively small and the product sold at a discount to granular amsul.

However, the supply crunch is primarily owing to a fall in domestic supply. US and Canadian producers experienced shutdowns during critical periods in Q1 with this a consequence of high feedstock prices (gas and ammonia). Higher raw material costs ebbed away at netbacks to a point where it became more profitable to sell the product back into the spot market. This was the case for IOC (PCI Nitrogen). The producer sold gas back to the US market. At the time, the producer published the following:

“…on February 13th in order to supply additional power to the Houston electric grid through its Cogeneration facility, (PCI Nitrogen) elected to shut down Ammonium Sulfate production. On February 15th due to the historical cold temperatures, the company was forced to shut all production at the facility.  At this time the company is unable to say when the facility will return to normal operations and will depend on the weather moderating and raw material supply normalizing.”

In the end, the shutdown lasted around two weeks. Other producers faced similar cutbacks in production. Producers have also opted to undertake maintenance with American Plant Food currently undertaking a six week turnaround.

Throughout this period, supply has not had a chance to catch up with demand. A producer that supplies customers in the northern states and Canada is reported to have advised customers that it is running around two weeks behind on supplies. The producer is not expected to catch with supplies in time for the seasonal application period.

By Michael Samueli, Head of Nitrates and Sulphates