The Profercy World Nitrogen Index has increased by 2.81 points this week to 213.46. Gains have not been as steep as in recent weeks, however, with the urea market waiting for the outcome of the latest Indian purchasing inquiry for much of the week.

Importers, particularly those in the west, have been on the side-lines, but neither traders nor producers have been under pressure to place tonnes. Indeed, ahead of this week’s RCF India tender, eastern values have been firm with Indonesian business concluded up to $458pt fob.

The only notable price declines have been in the US Gulf, which is moving into the offseason. Midweek, July barge values eased to sub-$415ps ton, $450pt cfr metric equivalent. 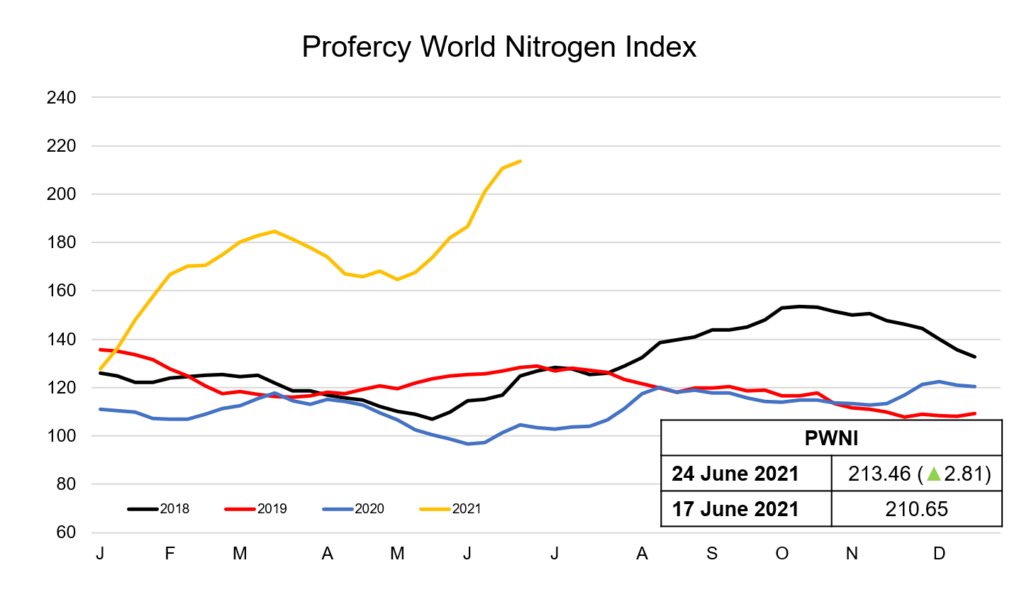 Given latest developments in India, the Nitrogen Index is set to make further gains next week.

Export interest from Chinese urea suppliers is set to be tested in the latest Indian purchasing inquiry. RCF received offers for around 1.8m. tonnes of urea for shipment by 11 August, from 13 suppliers this week.

Prices were revealed today, with the lowest offers submitted by Dreymoor at $501.96pt cfr west coast and $509.95pt cfr east coast. The lowest offer of just below $502pt cfr on the west coast is over $90pt above the lowest offer in the end-May inquiry. Notably, only 810,000t of urea were offered at or below $520pt cfr. If volumes are booked at the lowest offer level, this would be the highest price paid by India for urea since May 2012.

The success of this latest tender will largely depend on volumes available from China, where participation could be limited by a reluctance of major Chinese trading companies to support export business in favour of the domestic market. This is related to government concerns over the current high level of domestic values and the need to ensure supply.

While Fob returns from China to the east coast are high at $470-475pt fob, major participation from the world’s largest exporter is by no means guaranteed. If China does not supply, India will struggle to secure 1m. tonnes, as it has done in all three earlier tenders this year.

Urea exports will soon be made available from the new Dangote plant in Nigeria. The company confirmed this week that the first export cargo will likely be shipped to the US Gulf during end June/early July.

The first of the two ammonia-urea lines has a capacity of 1.27m. tonnes/year of urea and began supplying the domestic market in early-June. Up to 75% of product is believed to be for export, with the majority expected to be supplied to Brazil. The second ammonia/urea line at the complex is scheduled to start up by end-2021.

The news has come as a surprise to many in the market, with most anticipating the first round of exports no earlier than September. The impact that the extra volumes has on future export prices remains to be seen.