With economies around the globe starting to stage a recovery and high grain prices seen during the first half of this year, there has been buoyant demand for urea and other products in the nitrogen complex.

This has led to a rapid ascent in the Profercy World Nitrogen Index (PWNI), the index which utilises key global nitrogen fertilizer prices to derive a nitrogen value as a crop nutrient.

PWNI values increased 66% during the first half of 2021, from 128 points in early January to 214 by the end of June. Indeed, the increase has been so swift that the Index has hit fresh multi-year highs and is now at levels last seen in March 2013. The PWNI has averaged 173 points during the first six months of the year, the highest 1H average seen since 2014. 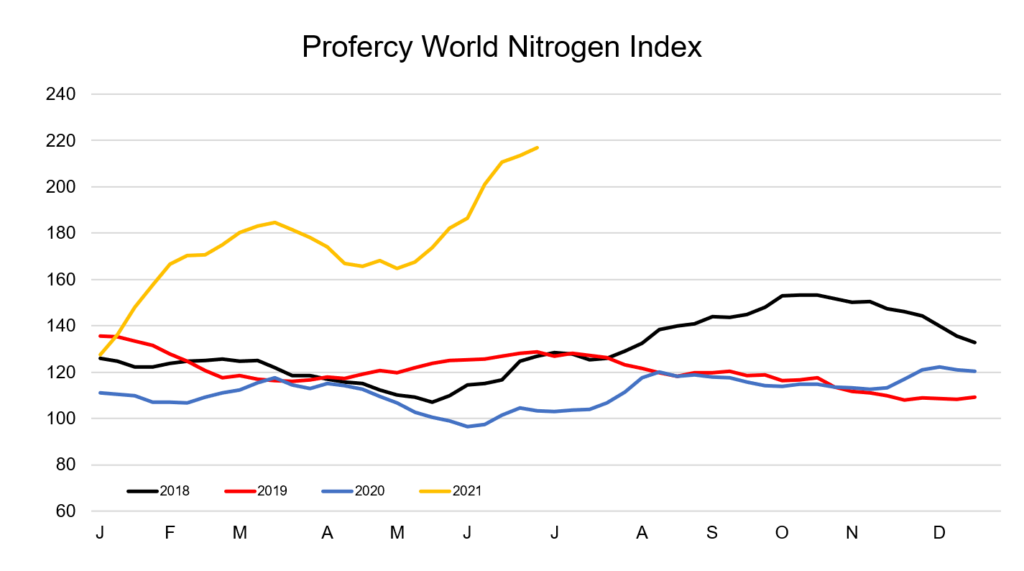 In the urea market, prices got off to a flying start in January, boosted by strong demand from the US, Europe and Turkey in particular. With a number of countries running behind with purchases, and supply increasingly tight, producers were able to sustain consistent price increases with each spot sale.

After a modest price correction in April, the bullish tone re-emerged in May/June with Latin America entering the market and a number of crucial urea plants shutting down for planned and unplanned maintenance works. This coincided with India entering the market to source requirements for the upcoming kharif season.

Problems for buyers were and still are compounded with China showing little interest in the export market. A country capable of exporting one million tonnes in one month as recently as October 2020 is now hardly playing even a supporting role on the world stage. Indeed, with domestic agricultural development now a key factor for the Chinese government to reduce dependence on overseas grain, cautious/reduced exporting of urea is unlikely to end soon. 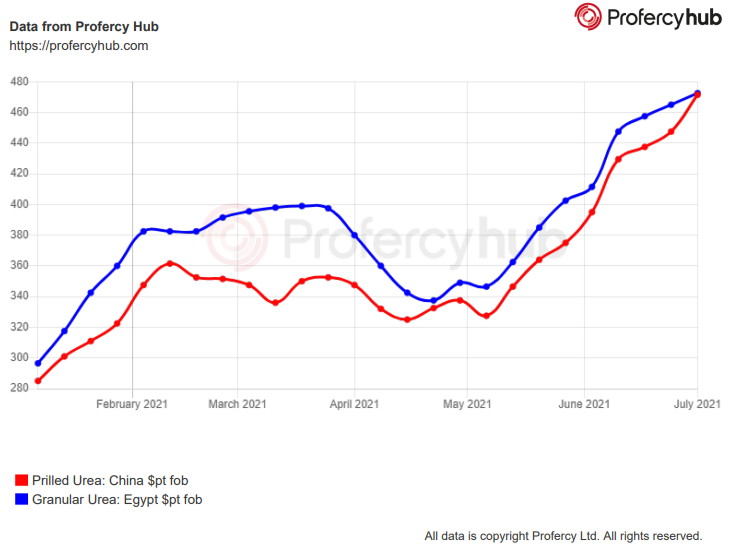 Prices boom: Illustrating the change over the past six months, Egyptian granular urea has climbed $168pt fob from an average of $297pt fob in early January to $465pt fob in late June. Average Arabian Gulf granular spot values have also undergone a similar boom, gaining from $283pt fob to $460pt fob over the period while, in the US Gulf, average 30 day out values have increased from $268ps ton to $438ps ton fob Nola.

India’s problems: Although the country has held four purchasing inquiries since late March, the world’s largest spot buyer has struggled to secure the volumes it needs, having booked just 2.7m. tonnes of urea to date.

During the most recent tender, it was forced to pay over $500pt cfr, a level that was last seen in May 2012. With India still behind on its requirements, a fresh inquiry will need to be announced soon. With the bullish sentiment remaining in the market, it is increasingly likely the world’s largest urea importer will be faced with higher urea offers in the next tender.

Unlike urea, Chinese capro amsul values were firm even before the 2021 nitrogen rally, with supply lagging demand (primarily SE Asian demand), since around August 2020. From August to end December, prices increased by around $20pt to the mid-$110s pt fob. This is roughly $1pt per week and the typical rate of price change for the slow moving amsul market.

Since then, capro amsul prices have surged to the mid-$180s pt fob China with the rapid rate of increase due to the the escalating value of nitrogen in all forms, especially urea. Indeed, price increases were primarily in two sharp bursts, during second half February (up $10-15pt in two weeks) and early June (up around $15pt in two weeks).

The bullishness was not all good news for producers. Chinese compactors, which use capro amsul as feedstock, suffered financially. Many had sold significant volumes forward through to normal channels for the Brazilian market. The sales were based on the usual price stability of amsul, which usually tracks sideways for extended periods.

Compactors first struggled to meet existing orders with feedstock capro values quickly surging above the mid-$140s to $150s pt fob. Partly as a result of the forward sales having covered some Q2 demand, Brazilian delivered (cfr) prices. Indeed, throughout much of the first half, netbacks (fob returns) from Brazil were below feedstock prices, production costs and transportation charges.

More recently, the market has found an equilibrium and Brazilian cfr levels have increased. Since early May, compacted and granular amsul prices in Brazil have increased by around $100pt to $300pt cfr. At the start of the year, prices were around $145-150pt cfr. For comparison, throughout 2020, prices fluctuated between $142-160pt cfr.

AN values held back

Following a promising start to the Russian domestic season, domestic ammonium nitrate demand came to an abrupt end in mid-April. Typically demand begins to wane around this period, but depending on other factors it can continue well into June. The primary reason for the more sudden end to the season was due to international fob values in the Baltic and Black Sea racing ahead of equivalent domestic prices. This situation is very unusual as traditionally in Q1, domestic demand is strongest and demand from Latin American markets comes to an end. However, this year, surging urea values lifted Brazilian cfr levels for AN.

This wrongfooted many Russian producers, who mostly over Q4-Q1 are fully focused on the domestic market. In mid-April, Russian buyers began to reject producer price ideas en masse, as the latter aimed to increase domestic prices to equivalent international levels. However, for the Russian producers, international demand was not sufficiently strong to absorb all their combined production. As a result of this supply glut in the international market, ammonium nitrate has traded at a significant discount to urea per unit N even though outright price increases have occurred due to urea. Since the start of the year, Baltic AN fob prices have increased by around $100-120pt to around $300pt fob. Of note, the bulk of the gains were over the last few weeks as Brazilian demand has picked up with prices in late May at around $220pt fob.

Tight US UAN supply puts producers in the driving seat

After a difficult 2020, UAN solution values have rallied in the past six months. The US market registered dramatic price increases from the beginning of the year well into Q2. Indeed, CF revised offer levels on an almost weekly basis in May. Against the backdrop of firm grain and urea markets, US supply has been tighter with prices bolstered by production cutbacks in February owing to the cold snap, while imports were at lower levels through the second half of 2020 and in the first five months of this year.

Average Nola values in 1H 2021 were $263ps ton fob, $131ps ton up on first half 2020. While the market is currently transitioning into the offseason, forward values have been supported by news that CF Industries has filed for an anti-dumping and countervailing duties investigation into imports from Russia and Trinidad. Derivatives contracts, cleared by the CME and settled against the Profercy/ICIS index, have traded just over $320ps ton for August.

Ammonia: Nightmare 2020 followed by dream first half for suppliers

After a dire 2020, ammonia prices have risen spectacularly in first half 2021 due to resurgent industrial demand in Asia, surging prices for DAP/MAP and NP/NPKs, and an unprecedented number of major plant problems globally due in no small part to maintenance delays in 2020 caused by Covid restrictions.

The shut-down factor has been most notable in the fact that Saudi Arabia has had to import ammonia for phosphate granulation in June due to successive plant issues. High prices have been paid, approaching $700pt cfr in latest business. Far East buyers are facing and paying the same level, while the barometer Black Sea price has risen to $550pt fob. This compares with a mid 2020 low of $175pt fob. Indeed, one year ago Middle East ammonia was sold to Morocco at around $150pt fob.

There is no easy fix for ammonia buyers as, while, export supply should eventually increase, soaring energy/gas prices have massively increased the breakeven position for ammonia plants in so-called marginal production areas around the world. For example, European gas prices equate to $470pt of ammonia just for gas alone. This excludes other production costs. Ammonia will not be cheap in second-half 2021.