Despite the downturn in the urea market which has seen Brazilian granular urea values decline by around $35pt over the last three weeks, standard amsul values remain robust. Over the same period, Chinese capro amsul values have gained by almost $20pt. Indeed, projections are for further price increases due to upcoming demand from SE Asia (primarily) over the coming weeks, no matter what happens in the urea market.

In fact, the pace of price gains in the amsul market have accelerated in recent weeks, driven by a sharp shortfall in supply. Chinese producers conducted planned turnarounds, primarily through July, which saw caprolactam production rates drop down to 55% of capacity, a 25% decline over 2-3 weeks.

At the same time, Gresik announced back-to-back tenders for capro amsul and eventually booked 140,000t in a June tender followed by a further 120,000t subsequently booked in a July tender. Further demand from smaller buyers in SE Asia seeking 6-8,000t lots on average has been steady. These same fundamentals continue to play out with further Vietnamese, Indonesian and Thai demand (among others) expected soon.

Over the past year, supply has been unable able to catch up with demand. In June 2020, Chinese capro amsul prices were pegged at $90pt fob. While values improved in the second half of 2020, the sharpest gains were reserved for this year. Fob values started the year at $115pt fob. Today they are close to $210pt fob, another multi-year high.

The sharp gains this year were to do with the surging urea prices lifting compacted and granular amsul values in Brazil. This significantly increased demand for feedstock standard grade amsul from compactors, making the tightness in supply more acute. 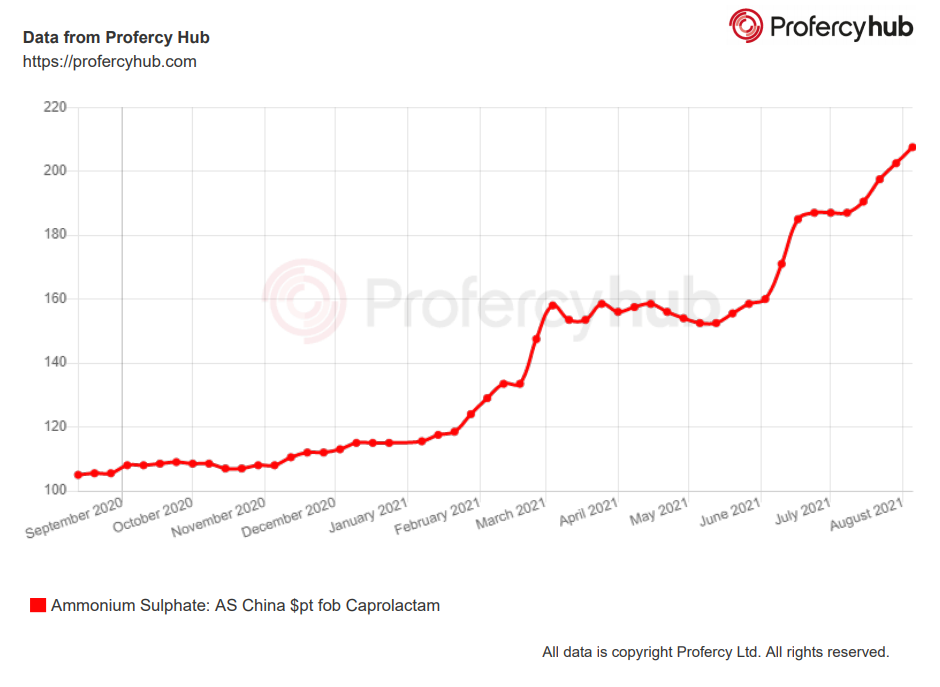 Eventually the gains in feedstock prices outpaced compacted amsul values. In April, the spread between capro amsul and compacted amsul fob levels fell down to almost $10pt. Compactors are estimated to need a differential of at least $20pt to breakeven in most instances. Eventually, compacted values caught up and the spread widened. The current differential is between $50-60pt on average.

While the downturn in the urea market has not had an impact on capro amsul owing to SE Asian demand, compacted amsul markets are less immune. In Brazil, compacted amsul values have eased for the first time in several months and the Brazilian market appears to have peaked. Traders have booked compacted amsul in China at $275-280pt fob but these levels are unlikely to be achieved again in the near future.

As the urea market continued to firm, compacted amsul values in Brazil shot up over the last few months as buyers started accepting seller price ideas having held out during the first part of 2021. Compacted cfr values have increased by around $150pt from mid-April to end-July as a result. Over the preceding year, prices only increased by $40pt, the bulk of which was in 2021.

Now that the urea market has softened, the risk is of a sharp decrease in compacted amsul values in line with urea. As mentioned, urea in Brazil has already declined by $35pt in the last three weeks. For now, the spread between capro and compacted amsul levels in China is around $60pt leaving around a $40pt margin (with $20-25pt for compaction production costs) for Chinese compactors. However, a decline in compacted values is likely and expected while raw material costs, including those for capro amsul, are likely and expected to continue to increase. The current $60pt spread is almost certain to be eroded. The extent to which this happens will be determined by the volatile freight market (Brazilian cfr netbacks to China) and the extent of the urea/compacted amsul downturn in Brazil.