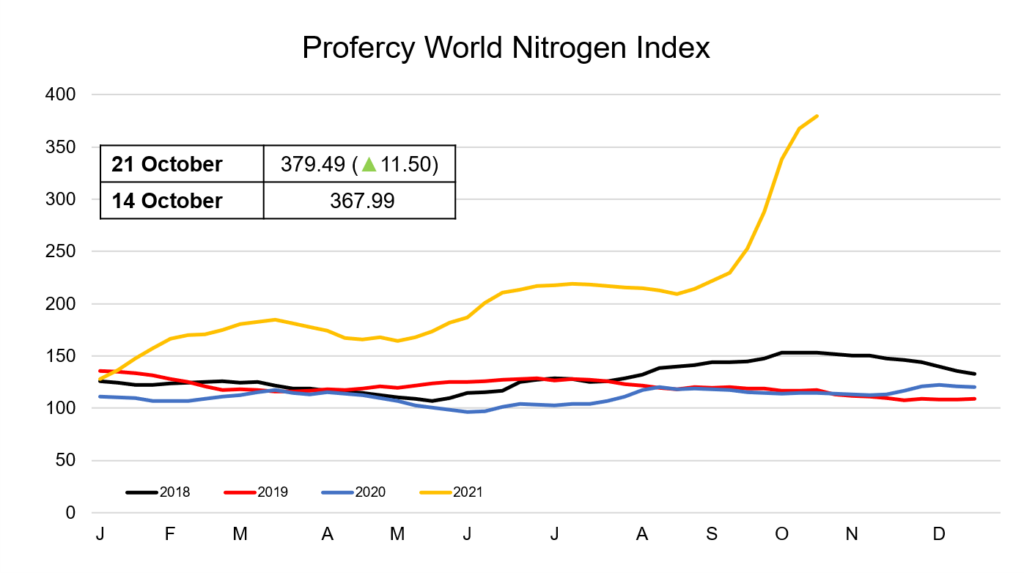 The Profercy World Nitrogen Index continues to reach new highs, this week climbing by 11.50 points to its highest ever level since inception of 379.49. The gains made this week have not been as sharp as those seen in recent weeks. Market activity has slowed down in a number of regions following a month of rapid escalation in urea values and ahead of an anticipated Indian tender announcement.

With export controls coming into effect last week in China, the impact on the urea market is already starting to be felt. Reports suggest that two to three cargoes committed to India for movement from river ports could be affected, while some small shipments for South Korea have also been cancelled.

Buyers who are usually reliant on Chinese urea have been checking other origins for shipments in November and December. In Southeast Asia, buying interest was noted as high as $750pt fob, an increase of $50pt fob from last done business that took place from Malaysia several weeks ago.

In the Middle East, granular urea values firmed in anticipation of India soon returning to the market with a fresh purchasing tender. A tender held by Omifco earlier this week for granular urea saw a highest bid received at $760pt fob, the highest level seen in the region since Q3 2008.

With Ethiopia’s EABC closing a tender for December onwards shipments next week, many Middle Eastern producers are currently holding back from the spot market in anticipation of firm demand from the African nation, as well as from India.

In the west, European buyers took a step out of the market after a period of heavy buying. Similarly, US buying interest was also lacking for the same reasons in the Nola urea barge market. Sellers with nearby October/November barges in hand had to cut offers in order to find liquidity. With latest business taking place in Brazil over $800pt cfr, the offseason Nola market remains at a significant discount to Brazil, around $34-55pt based on last done business. The Latin American importer is now entering its peak season for urea and will likely have to compete with India going forwards.

Urea supply in the east and west remains limited, and with India running short on its requirements and expected to still need a up to 3.5m. tonnes for arrival by end-February, further urea price gains are expected.