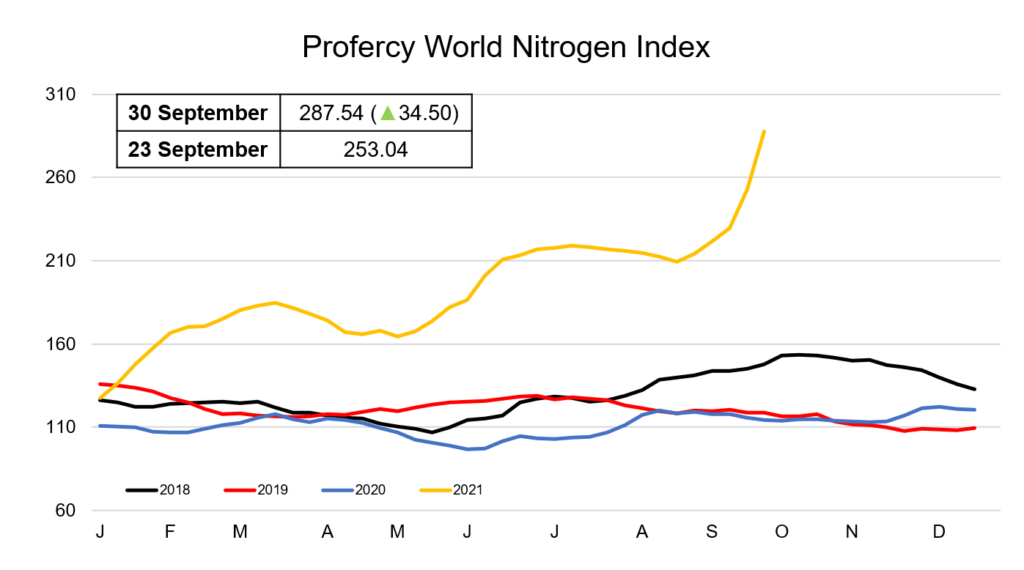 With values of urea and other nitrogen-based products once again making sharp increases, the Profercy World Nitrogen Index has made its largest ever weekly increase and hit an all-time high this week of 287.54, up 34.50 from last week.

In the urea market, the price rally that begun in the west in early September has now extended to the east. A surge in demand for urea during a time of limited availability owing to production losses caused by surging gas prices in Europe, has allowed urea producers to achieve higher prices with each sale.

Granular urea values in Egypt have made some of the strongest gains. At the end of August values were below $440pt fob. However, as market fundamentals switched, traders changed tact and started to accept producer price ideas to secure tonnage. Since then, over 400,000t of granular urea has been sold for September onwards shipment. The latest sales have taken place at and above $700pt fob.

Meanwhile, the US Gulf was struck by Hurricane Ida in early September. Urea inventories were already considered low prior to this due to domestic production cut backs earlier in the year. However, prior to the hurricane and European gas price surges, buyers were unconcerned. With demand lacklustre, very few import cargoes of urea were booked for the region.

In the aftermath of Ida, domestic production has not caught up with the lost supply. Further fuel was added to the fire as European production started to be impacted by the high gas prices. With supplies already tight and the risk of missing out on spring requirements increasing, US buyers have since been paying a premium to secure import volumes. Although there have now been many vessels booked for arrival in the coming months into Nola, this has done little to alleviate fears amongst buyers over a supply shortage. Deferred values have also risen sharply and are now trading close to prompt month values. Prompt barge values have undergone a rapid ascent over the last month, rising from a low of $420ps ton fob Nola in late August to $650ps ton fob Nola late last week.

Buyers in Brazil have been slow to react to the rapid gains in the US and Europe. Throughout much of September they have sat out of the market, however, there are now signs that buyers are willing to accept the higher levels, with latest business taking place last week at $715pt cfr, up from around $460pt cfr in late August.

A similar situation has also been seen in the east, with markets remaining relatively inactive during the early part of September. SE Asian fob values were in the mid $420s pt fob in early September, however, latest sales last week have now taken place around $160pt fob higher. To compound the already existing crunch on supply, India is estimated to require around 4.5m. tonnes of urea before end-January, or 1.1m. tonnes per month. Only China can export sufficient volumes to satisfy Indian demand. However, with Chinese gas and energy prices also high and the government actively discouraging exports in favour of the domestic fertilizer market, the prospect of major exports in Q4 appears low.

Nitrate values have undergone similarly staggering price increases in Europe. This once again due to production cutbacks in Europe due to high feedstock gas prices. Among the first to buck under the pressure of gas prices was CF Industries in the UK, which shut both its plants. Yara soon after announced cuts to its ammonia production. In France, Yara increased AN prices from just under €400pt cpt bulk in early September to €590pt cpt bulk in early October. On CAN in Germany, Yara’s list prices have increased from €313pt cif bulk to €468pt cif bulk over the same period.

Despite the staggering and unprecedented rate of price increases, the current bull run does not appear to be nearing an end. This as gas prices continue to increase globally and production rates remain low.