Global urea values have continued to race ahead and are yet to show signs of letting up. As the below table demonstrates, urea have significantly advanced since late August. With fundamentals in the nitrogen markets remaining strong, it appears there is no end to the increases for now.

In the urea market, following its latest tender, India booked just 732,000t for the east coast this week, however suppliers have been unfazed by this.

Demand from western markets remains sky-high, and most notably, with Brazil stepping back into the market this week, Middle Eastern producers have been confident in skipping Indian business this time round. Meanwhile, traders with positions in China have been happy to supply to India prior to potential export controls being introduced in the country.

It is increasingly likely that India will need to hold another inquiry shortly if it is to catch up on imports during the coming months. However, China’s likely absence from the international stage for the rest of the year and into 2022 presents a big challenge for the world’s largest urea importer.

In order to secure the 3.5-3.8m. tonnes required by end-February, India will now need to compete with western markets for not only Middle East and SE Asian supply, but also product from the FSU and North Africa.

This appears increasingly difficult given the supply challenges currently being faced in Europe, as well as in the USA. European gas prices hit new highs earlier this week and remain volatile. With many producers in the region having cutback, or fully halted operations during this time, the outlook for future domestic supplies remains uncertain.

This has allowed Egyptian urea producers to continuously increase offers after each sale. Granular values from the region have rallied by over $150pt fob since late last week, with latest business taking place at $830pt fob. Meanwhile, ex-warehouse business in France has now taken place over $865pt cfr equivalent.

Across the Atlantic, the Nola urea barge market continues to feel the impact of low inventories and earlier cutbacks to domestic production. Values have been rallying in the aftermath of Hurricane Ida and values also hit new highs this week, with February barges trading as high as $788pt cfr.

After a sustained period of absence, Brazil has stepped up with over 100,000t of urea booked in the past week at increasingly higher prices. Latest reported business was not much below $800pt cfr.

With future supplies uncertain in both the east and west, the current bull run in the nitrogen market looks set to continue. The Profercy World Nitrogen Index climbed 50.51 points this week to hit a fresh all-time high of 338.05. Over the past three weeks the Index has gained by over 105 points. 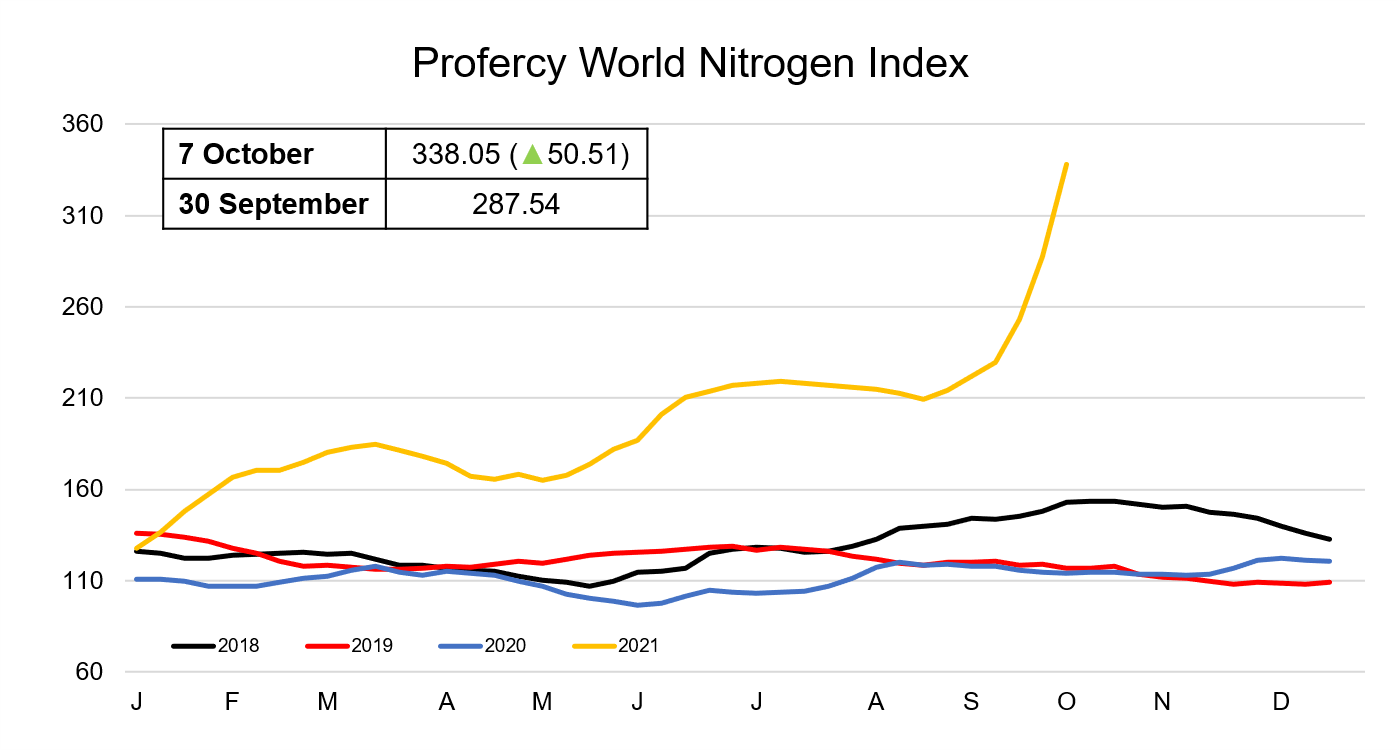