India has this week announced two new purchasing inquiries, within days of the conclusion of the latest producer-only tender that resulted in only 465,000t of urea being secured by the country.

With the world’s largest urea importer desperately behind on purchases for this season, it has had no choice but to pay high prices for the limited volume on offer in the last tender. This has re-established India as the premium market amongst its counterparts.

Producers in the Middle East with availability were able to take advantage, with 315,000t sold to India around $43-47pt fob higher than last done business from the region. Middle East spot levels are now at their highest levels since records began and have surpassed the August 2008 peak of $895pt fob.

Just two days after the close of the latest tender, India’s RCF announced a new inquiry for a long-term supply contract of 1m. tonnes of urea per year closing 17 November. The tender is for an initial period of three years, but can be extended for another two years thereafter. However, only producers with at least 2m. tonnes/y of urea production are able to take part.

India’s IPL has today also announced a new purchasing inquiry. This will close on 11 November for shipments till the end of the year, with offers from both manufacturers and traders invited.

According to Profercy estimates, India still requires some 2.5-3m. tonnes by late January. This has become an increasingly arduous task following China’s decision to place a ban on fertilizer exports from mid-October.

Concerns regarding future urea supplies were heightened further this week, following the announcement from Russia that export quotas will be introduced from 1 December to ensure Russian domestic supplies. However, with ammonium nitrate the favoured nitrogen product in Russia, the quotas are expected to primarily target AN exports, and are not currently expected to impact urea exports too greatly.

The response from global urea buyers has been varied. In the east, greater levels of inquiries have been noted from markets such as South Korea, which typically imports most of its supplies from China. This has inevitably led to greater demand for urea from elsewhere, including SE Asia, where bids were heard approaching $900pt fob this week.

Latin American markets have not yet responded, with Brazilian buyers currently adopting a cautious approach and only willing to book from floating vessels or November shipments.

Inquiries are now starting to emerge for western European markets, as well as Turkey, and some traders have been willing to take positions at higher fob levels. This has allowed Egyptian producers to increase their offers with each subsequent sale, with granular urea from the region now hitting $900pt fob, the highest level seen in 13 years.

With supply uncertainty continuing to hang over the urea market, there is seemingly no end in sight to the bull run in values. The Profercy World Nitrogen Index has now hit a fresh-new high of 407.52, up 17.21 points from last week. 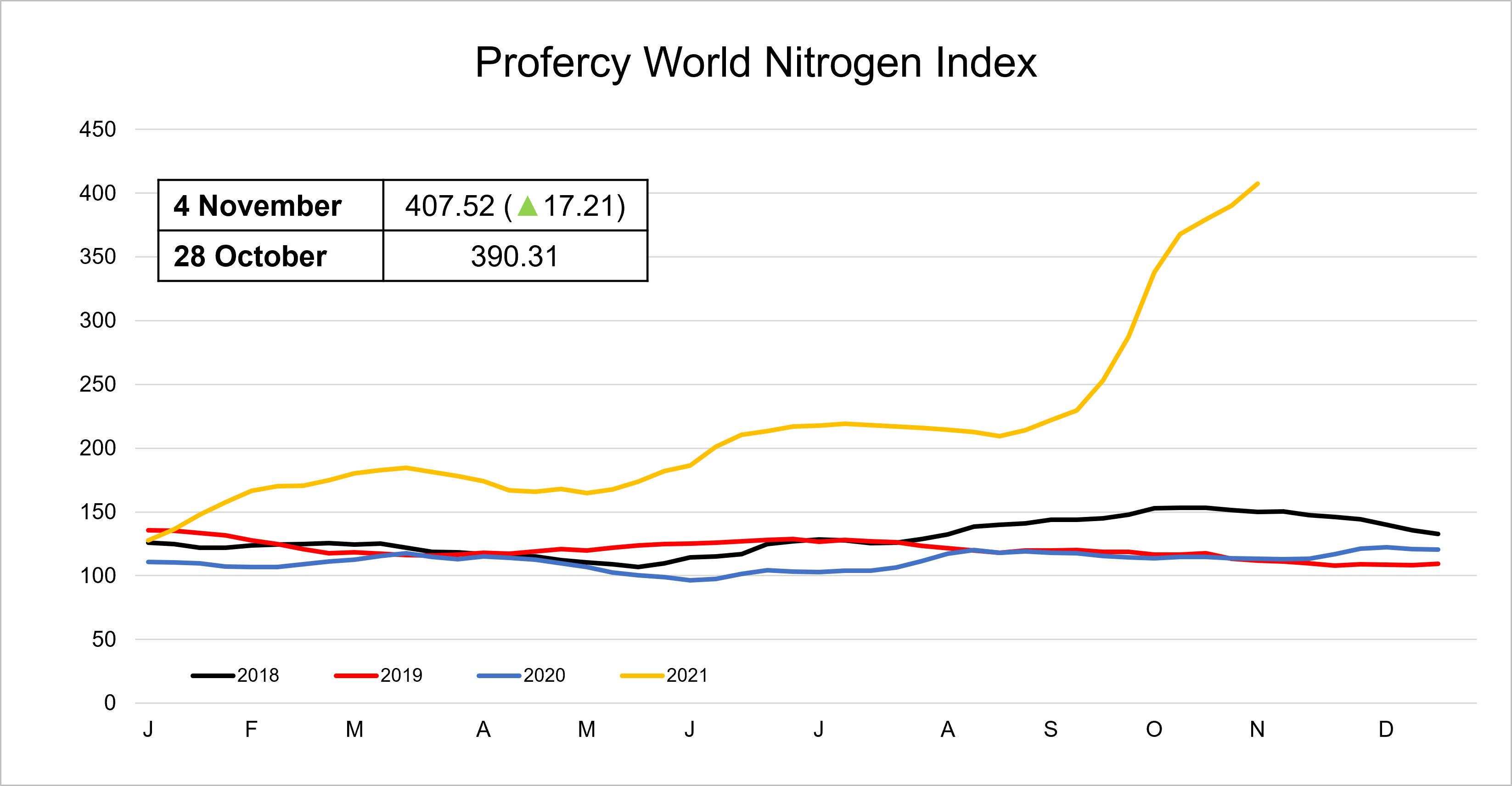