Beyond some relatively small scale buying in Brazil and the US Gulf, all eyes (producers, traders and buyers) were on the Indian IPL tender of 11 November. The tender did not underwhelm with the lowest offer for the west coast above $980pt cfr and the east coast just under $1,000pt cfr.

China’s absence from the export markets has been a major factor in allowing for the high offer levels. In previous years, when prices have hit such heights, it has attracted major Chinese participation in Indian tenders. Export controls in China have effectively blocked this option and left India scrapping for urea from other suppliers along with the US, Brazil and Europe.

With suppliers spoilt for choice, there was no incentive to offer low into India. Indeed, suppliers were at a loss as to how high it was reasonable to offer at. Either way, the Indian cfr offer levels provided netbacks well above those in the west. Implied Indian netbacks to the Arab Gulf, were up to $150pt above netbacks from the US Gulf.

Similarly, in the Baltic, potential netbacks for shipments to India are around $100pt above all other netbacks for granular urea. For prilled urea, the netbacks were even better. Indeed, despite the logistical difficulties with shipping out of the Baltic, around three cargoes could be shipped. Typically, Baltic suppliers skip Indian business in favour of western markets.

The netbacks are so vastly better that producers are unlikely to worry about committing all their December cargoes to India now and not having product available should the current price run up continue. In the recent past, this has been a major consideration, especially among Russian suppliers.

For India, high prices are likely to secure large volumes for the country. IPL has requested confirmations by 14:00 IST on 15 November and the market reasonably expects over 1m. tonnes to be committed under this tender. If realised, this would mean India has attracted volumes from every major fob region in the world that had product available. This of course bodes badly for any of the other markets requiring November/December shipments of urea.

As a result of India almost singlehandedly seeking to absorb the remainder of November and December availability, the Profercy World Nitrogen Index gained by 20.64 points week on week to 428.16 points. Since mid-September, the Index has gained just short of 200 points. 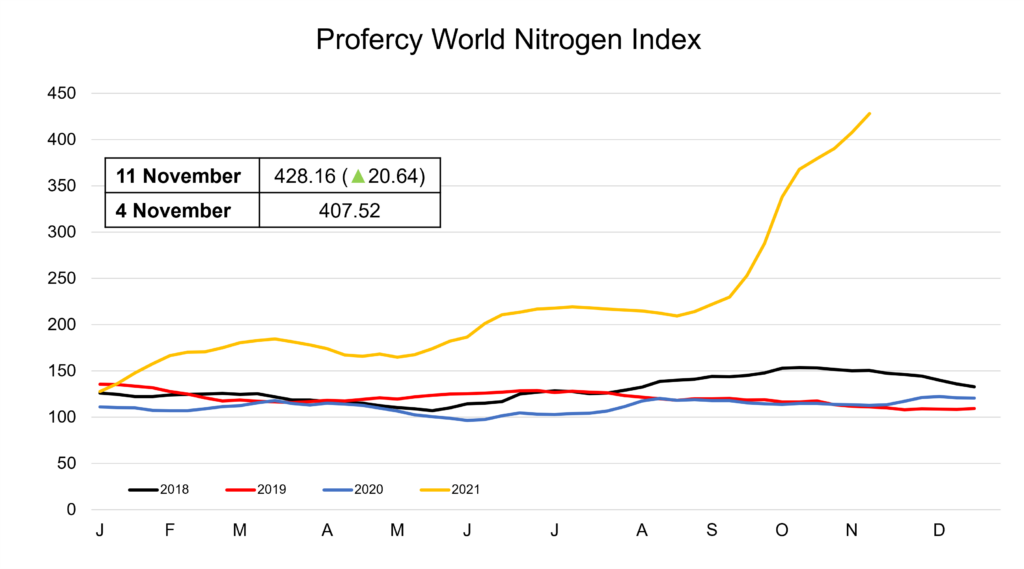