The global urea market has entered 2022 on a significantly softer footing, with sentiment switching in the aftermath of India’s latest purchasing inquiry.

The IPL tender saw purchases capped, with close to 1.2m. tonnes booked by India for January shipment. This was far lower than many in the market had expected. Indeed, with the world’s largest urea importer now not expected to return until March at the earliest, and demand in other regions currently limited, the excess supply will need to be directed to markets that have been trading at a major discount to India for some time.

The 23 December IPL tender saw volumes booked at $894pt cfr west coast and $899.50pt cfr east coast. This brought lower fob values than the market had seen in weeks prior to the tender. However, traders have not struggled to cover awards in the past week, and producers on the whole have been willing to back the business to place volume and minimize exposure to other markets.

In the Middle East, netbacks over $860pt fob were quickly accepted by producers, and Malaysia also sold two cargoes at similar levels in the past week. At least five FSU cargoes have been committed at $810-820pt fob Black Sea equivalent, and slightly lower prices were achieved from the Baltic.

Meanwhile, with European buyers yet to return to the market following the holidays, granular urea ex-Egyptian Mediterranean was sold under $850pt fob to India. Although many producers with small volumes in hand continue to indicate at much higher levels, there has been no interest amongst buyers to pay these levels.

With around two months to go until river opens, the offseason Nola market has been on edge following the latest Indian purchasing tender owing to the lack of bullish sentiment in the international market. Barge values underwent a dramatic decline midweek as a result, with a number of traders with January and February positions significantly cutting offers in order to entice buyers back into the market.

However, these prices appeared sharp relative to elsewhere, and distributor interest emerged the following day. The higher bids soon pushed nearby prices back up, with January barges recovering by $85ps ton from the lowest point and trading up to $700ps ton fob Nola. 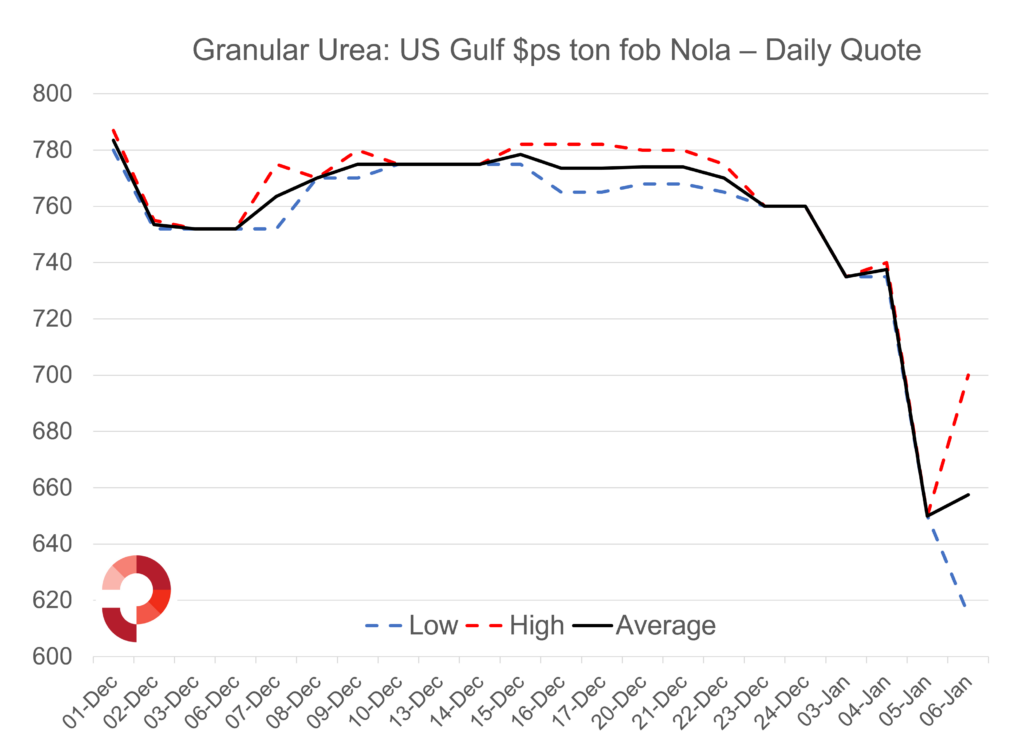 The volatility in Nola characterizes a market that is searching for a new equilibrium post-India. Owing to the significant decrease in fob values globally as a result of the Indian netbacks, the Profercy World Nitrogen Index has fallen by 21.66 points this week to 421.61. This is the largest decline made by the Index since December 2011.