Following its purchasing inquiry last week, India’s IPL issued LOIs and went on to secure just under 1.4m. tonnes of urea for February and March shipment. Despite China still being out of the export market, India nonetheless managed to secure major volumes in line with its pre-tender target as suppliers.

However, even with India absorbing 1.4m. tonnes of availability, the global urea market continues to suffer from a lack of demand in other import markets. While at the same time, material is still available from Russian and North African producers for end February and March onwards shipments. As a result, fob values have eroded further this week.

While Egyptian producers have been mostly trying to hold offers above $600pt fob, latest offers from Algeria have been reported sub $580pt fob. This is a far cry from the beginning of the year when values were at a high of $900pt fob in the region.

In the Baltic, small volume sales have taken place into Europe and other long-haul destinations, however, this has not been enough to absorb the volumes still available from the region.

India has now secured 2.6m. tonnes during its last two tenders, and with a new 1m. tonnes/year offtake agreement signed with OQ Trading, most now consider the world’s largest urea importer to have reduced the import deficit that was amassed during the latter half of last year.

Local reports suggest that a tender is being considered for the second half March for April onwards shipments. However, in the interim, demand from elsewhere will need to surface in order to support global urea values ahead of any further Indian inquiry.

Indeed, producers have turned their attention towards the USA and Europe, where spring demand should emerge shortly.

European buyers have continued to wait until the last minute to book additional tonnes for the season, and participants remain uncertain over whether significant demand will be seen this year from the region. The US is expected to provide a good outlet for shipments in the coming months. While in Latin America, import demand for Q2 should start to build soon.

Producers in the west will be especially reliant on these markets if they are to clear their order books for late February and March shipments. For the time being, however, they will have little choice but to wait for the buying interest to appear.

With urea fob values falling further, the Profercy World Nitrogen Index has declined by 20.91 points to 320.20 this week. Since the beginning of the year, the Index has lost around 100 points. 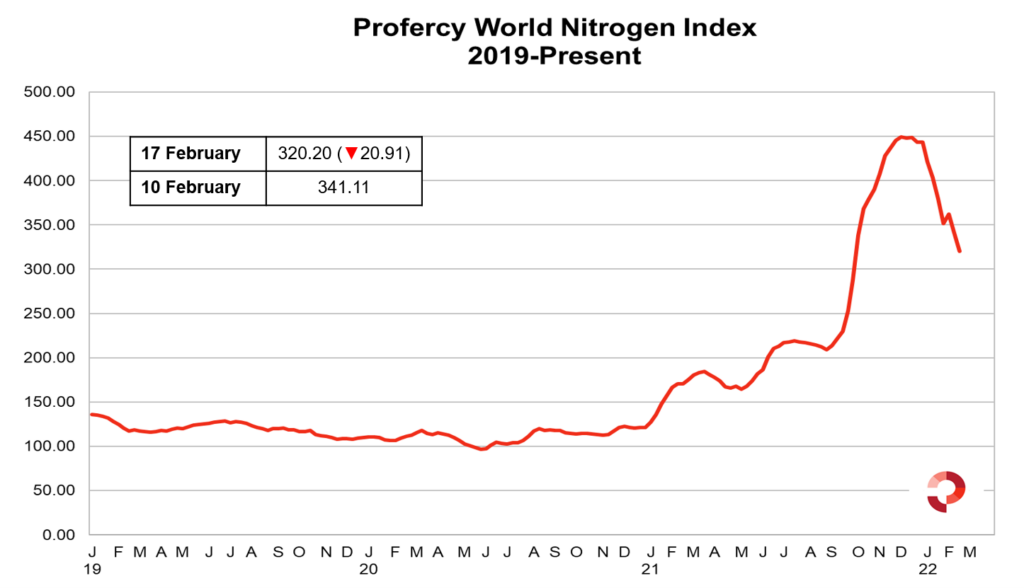