The Profercy World Nitrogen Index (PWNI) has hit a fresh all time high this week, climbing above 455 points as the lack of Russian supply continues to be felt across the global urea market.

The impact of self-sanctioning by many traders and importers in the west has resulted in very minimal business from the Baltic since the conflict in Ukraine began. The impact on logistics and shipping in the region is also proving a massive hurdle to business.

This has led to a scramble for urea from other regions and has pushed global values to well above the highs seen late last year.

The pace of fob price appreciation has cooled this week, however, owing to the lack of nearby availability at the producer level. Producers in North and West Africa are largely committed for the next 30 days. In Egypt, producers are currently only willing to place small volumes for April with sales taking place up $30pt fob from the highs reached last week.

Traders also took a step back this week, with many currently focused on placing cargoes booked earlier. While in Europe, traders have placed March and early April shipments over $1,050pt fob Egypt equivalent. European production remains under threat from high gas prices, and offshore ammonia import costs have also shot up this week.

Mexico, Argentina, and Canada have also all been active in the market this week for non-Russian urea.

With western markets increasingly close to their peak demand season and India also set to return shortly with a fresh purchasing tender, it seems unlikely that the disruption of trade flows from Russia are currently fully priced in to the market.

The PWNI advanced by a further 33.08 points to 455.58 this week, the highest level ever recorded since its inception. 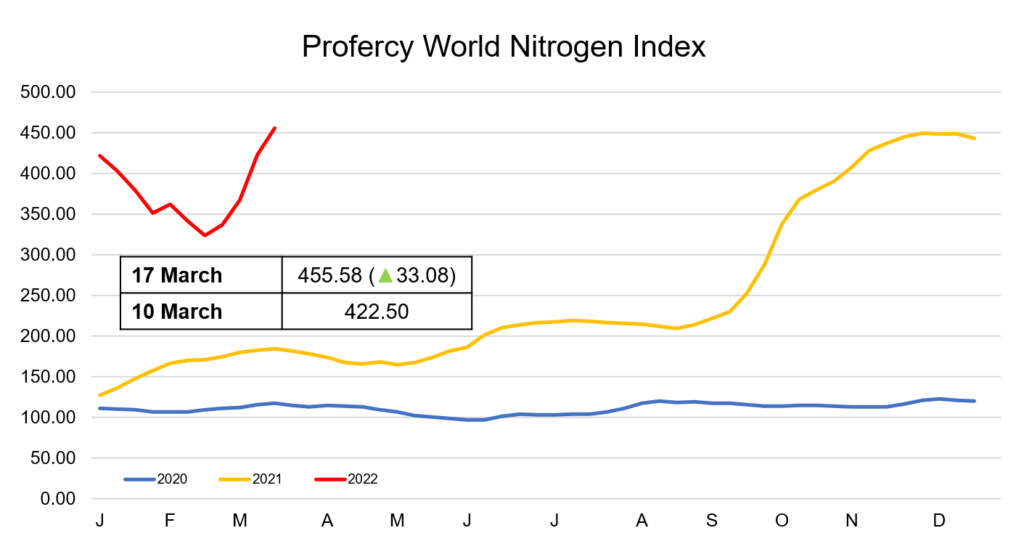