The Profercy World Nitrogen Index has made its first decline in six weeks, edging down by around four points as nitrates values underwent a correction this week, while urea values remained stable. A number of major European producers cut nitrates prices, or indicated to buyers a willingness to discuss sales well below earlier official list prices.

The price reductions were primarily corrections in prices that were set at a time when gas prices were surging. Producers were previously concerned about committing product at levels that would not be profitable. However, with more stability now seen in gas prices, producers have lowered offers in an attempt to entice buying demand.

Meanwhile in the urea market, activity slowed down with participants now expecting an Indian purchasing inquiry to be announced soon for shipments up to mid-May.

Most buyers have been reluctant to commit to purchases ahead of the tender and have taken a step back from the market. However, many producers remain in a comfortable position having previously sold into 2H April. In the Middle East sales have taken place at $950pt fob, in line with last done. While, producers in North Africa continue to hold offer levels above last done, around $1,150pt fob.

In Europe, major demand from some markets is anticipated shortly. Yet, only small volume inquiries are currently circulating with buyers adopting a hand-to-mouth strategy for now. Activity elsewhere was limited with buyers in Central and Latin American markets taking a step back, and the peak buying season in the US yet to get going.

The debate continues regarding whether Russian urea will be able to find a home in India. Although many expect that India will remain open to Russian shipments, logistics remains a major barrier to business. Furthermore, many traders may also be deterred from attempting the business for fear of sanctions related risks. Participants continue to eagerly await the outcome of the inquiry to see which direction the market will turn next.

The Profercy World Nitrogen Index declined 4.47 points to 472.04 this week. 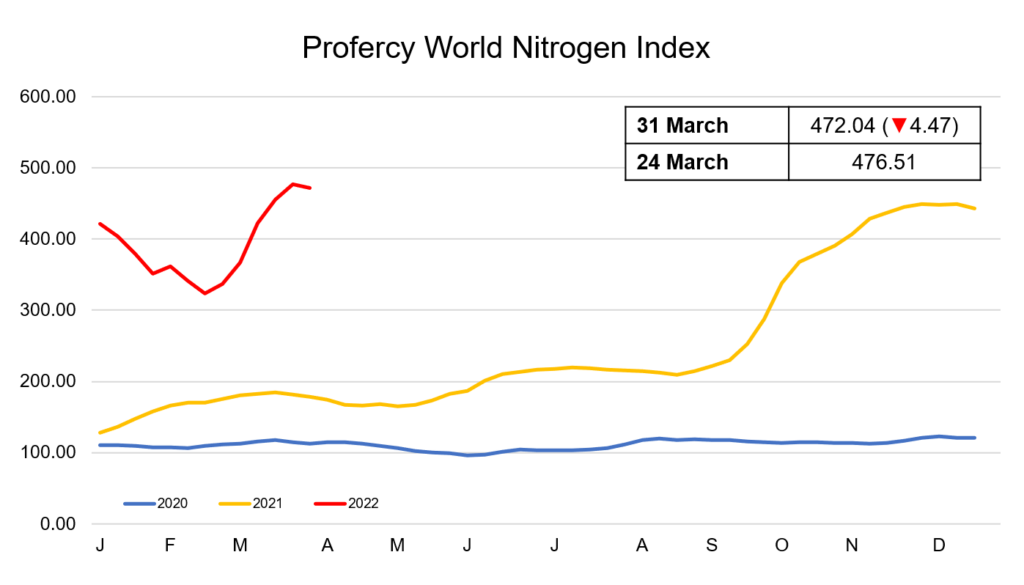