May 13, 2022Leave a commentGeneral, Nitrogen

After an extended hiatus, Russian producers have re-entered the international ammonium nitrate markets. This has resulted in a major reduction in AN values on both a cfr and fob basis. The weakness in the global urea market has been the main determining factor for AN values over the last week as buyers declined to accept substantial premiums for AN over urea per unit of nitrogen.

Several buyers in Central America closed a joint tender earlier this week for just over 20,000t of ammonium nitrate along with prilled urea for late May/early June shipment. The tender was the first public test of Russian AN availability and values this year. 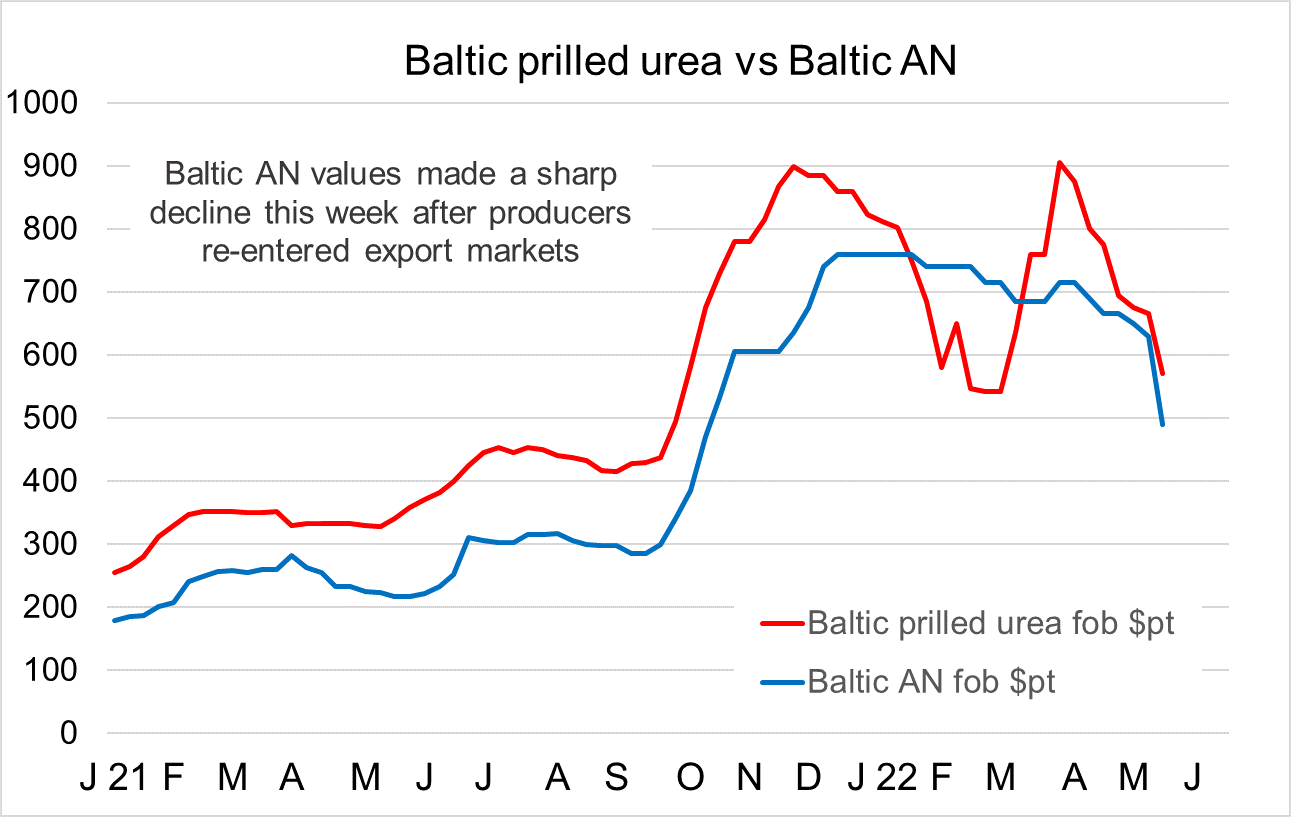 Indeed, supply of AN has been disrupted since November when rumours of export quotas led to a near paralysis in trade as producers awaited details. Quotas came into force from 1 December and only allocated 744,000t of AN for export from 1 December to 31 May, less than half the average volumes normally exported over that period.

Then in late January, an outright ban on AN exports were announced for February-March before this was extended to end-April. During this period, the Russia-Ukraine war and subsequent sanctions greatly disrupted trade from the Baltic for all nitrogen products.

More recently, the Russian domestic season has come to an end. June and July are typically too early for producers to start putting product in storage for the next season. Russian laws around the handling of AN prohibits product being stored for more than 6 months in any one location.

Meanwhile, the Russian government has announced that the export quota regime which ran from December-May will be extended into Q3 and likely into Q4. Details of the allocations have not yet been finalised, however, unlike November 2021, Russian producers do not have a domestic market to rely on and must therefore seek export markets for June. Should the export quotas prove to be restrictive in terms of volume then it will mean lower exports in the subsequent months of the year.

Given the above, Russian producers have needed to turn to international export markets. In Brazil, several have been offering AN for June shipment with some business taking place. Offer levels prior to the latest Latam tender (see below) were reported at around $630-640pt cfr with buyers targeting lower.

On the whole, importers have been reluctant to accept a substantial premium for AN per unit nitrogen over urea, especially so given the slow pace of offseason nitrogen business and sustained price erosion evident in the urea market since second half April.

On a nutrient basis, the above offers reflected a 15% premium over urea. Without a premium, AN values would need to have been sub-$550pt cfr.

In any case, offers in the low-$600s pt cfr from producers marked a major depreciation in Baltic AN values. These had been at historic premiums because of the earlier lack of supply. High freight rates of around $100-110pt from the Baltic to Brazil, caused by the sanctions on Russia, further ebbed away at fob values.

While recent offers in Brazil had already marked a major decline in fob values, the latest tender in Central America forced prices lower. Up to 21,000t of AN, alongside prilled urea, was sought for late May/June shipment. The AN is reported to have been sold by a Russian producer at around $600pt cfr west coast.

Further ahead, international AN values will increasingly be determined by the urea complex and the volumes allocated in the upcoming export quotas. As is often the case, urea values will cap the maximum levels buyers will be willing to accept for AN, but export quotas could still significantly limit supply.