The Profercy World Nitrogen Index (PWNI) has dipped lower this week, although the losses have not been as sharp as those seen in recent weeks. With liquidity remaining light in the urea market ahead of the imminent purchasing inquiry by India’s RCF, the decline in fob values has slowed down this week and some believe a price floor could soon be found.

India’s state purchasing agency has stated it intends to purchase around 1.5m. tonnes of urea via this inquiry, seeking shipments through to 5 July. This has brought some welcome news to producers and traders holding volumes.

With import demand from Europe and the US failing to improve during the past month, buyers worldwide have opted to defer their purchases until a price floor is established. As a result, there are now significant volumes for May and June shipment uncommitted from the Middle East, North Africa, Nigeria, and SE Asia. Producers in both the east and west are therefore expected to be eying this business as a potential outlet.

The latest tender documentation from RCF suggests that shipments from Russian Black Sea ports will now effectively be blocked. While participants in the tender will also be required to confirm in writing that they are not offering product from origins that have been affected by western sanctions.

Nevertheless, with ample availability elsewhere, the restricted Russian volumes are not expected to pose any problems for India in sourcing the volumes it requires in this tender.

In latest business, significant volumes of granular urea were committed from SE Asia this week at last done levels. While in Europe, late season demand has emerged and some business was heard taking place into France.

Many remain hopeful that deferred demand will emerge from key markets including Australia, Mexico, Brazil and SE Asia, following the conclusion of the latest RCF purchasing inquiry. For now, however, participants continue to eagerly await the outcome of next week’s market-defining inquiry.

The PWNI declined 5.81 points to 360.00 this week. The Index has now fallen back down to levels seen during early March. 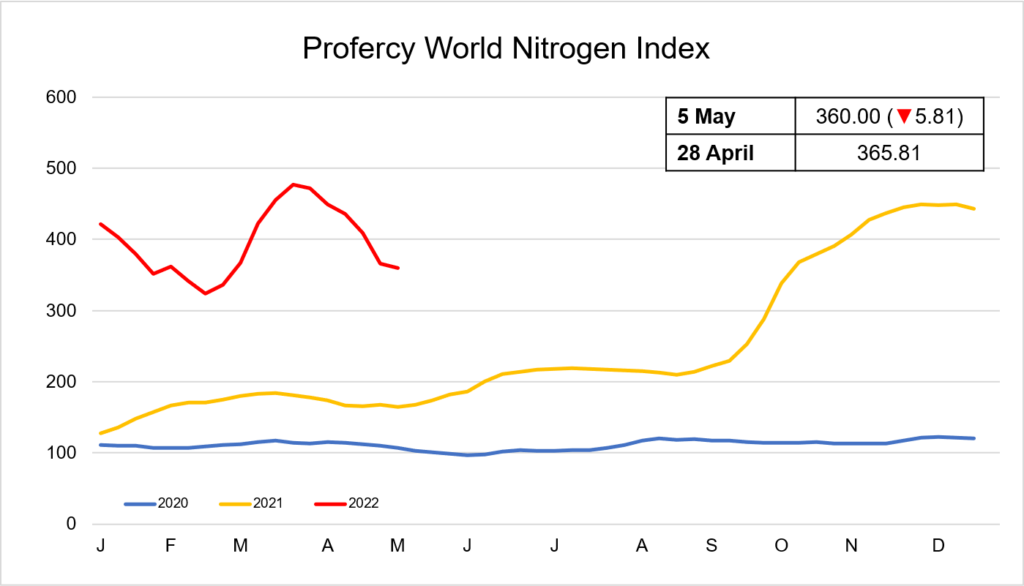