The Profercy World Nitrogen Index has descended again this week. With demand for all nitrogen products remaining lacklustre, values across the nitrogen-based complex have eroded further.

In the urea market, buyers in almost all major buying regions remained absent from the market. With demand lacking for a number of weeks, producers have been left with few options beyond cutting prices sharply or pinning their hopes on a fresh Indian inquiry in early July. Some also continue to hope for a pick up in Latin American demand, but even this is a challenge with Russian producers prioritising filling order books over achieving the highest possible prices.

Where trading activity has been taking place, it has been for small volumes. In Indonesia, a sales tender failed to generate any major buying interest this week. Small volume sales took place to traders covering short positions, at a significant discount to last done business from the region nearly one month ago. The producer has been continuing discussions with other buyers for the remaining volumes it has for July shipments.

In North Africa, Egyptian producers had previously been attempting to hold a firm line. However, following weeks of minimal buying interest, and with all still holding on to June volumes, most have now lowered their price ideas.

While in Algeria, the have been reports of indications down to the mid to high-$500s pt fob for the next round of business, a $600pt fob decline from the highs that were seen from the region in late March.

In the US Gulf, the Nola barge market came under further pressure. Traders with June barges in hand once again had to cut offers in order to generate buying interest. This led to barges trading as low as $410ps ton fob Nola, a $528ps ton decline from the all-time high that was hit in late March, and level with values that were last seen from the region in August 2021.

The latest dip in values did see a moderate improvement in interior demand, and prices ticked higher later on in the week as distributors entered the market again for new barges. However, with Nola values lagging the international market, participants continue to discuss re-export opportunities from the region.

Meanwhile, in Europe, activity had been very slow until the latest change in the European gas complex, following a Russian decision to cut gas volumes. Dutch TTF prices surged by around €40/MWh to over €120/MWh following the news. This will once again increase production costs for European producers with the threat of production cutbacks once again a reality.

With a bearish sentiment prevailing across the nitrogen-based complex, the Profercy World Nitrogen Index fell 22.45 points to 257.63 this week. 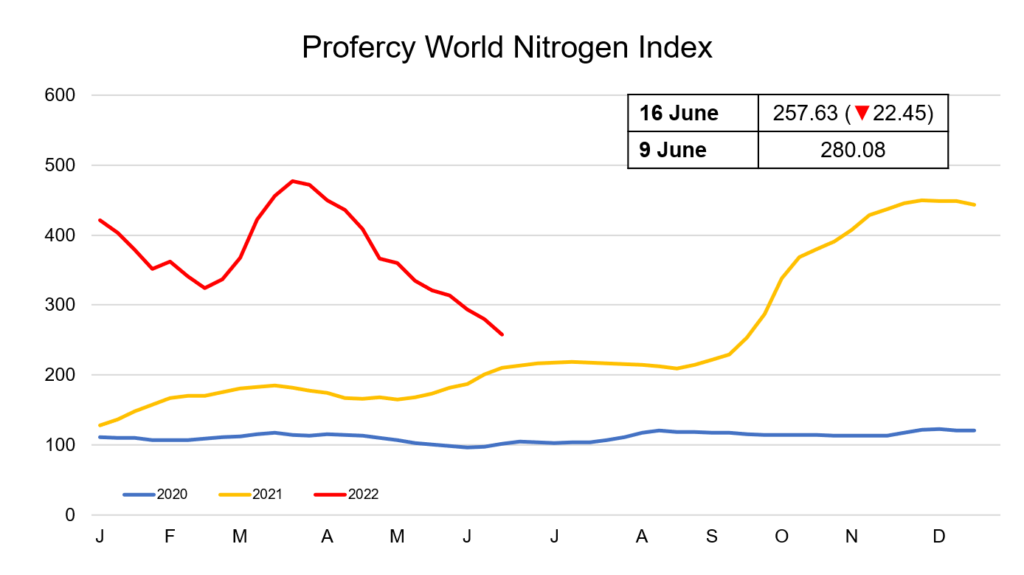