The European gas situation has led to a flurry of pricing activity in the nitrates market, albeit against little concluded business. With nitrates the primary premium nitrogen product in Europe, producers are expected to do their utmost to keep production running at capacity even if output levels for other products including urea, UAN and ammonia are drastically reduced or altogether shut down.

Indeed, the latest developments and reduced production, particularly in eastern and southern Europe, have triggered urea imports from non-traditional suppliers such as the US Gulf. Several cargoes of granular from the US Gulf are reported to have been committed to Europe including to Poland/Baltics and Spain.

In France, Yara increased its AN offer levels to €825pt cpt bulk with Borealis reported to be quoting at €840pt cpt bulk. Yara’s price increase was without an official announcement and only limited volumes have been allocated for sale at this price for August deliveries. The producer last announced list prices on 10 May at €790pt cpt bulk for France.

In Germany, no new pricing has been set but major producers are reported to have achieved sales at €650pt cif bulk, up €10-20pt on recent levels. Offer levels are reported to range from €650-700pt delivered. Suppliers looking to liquidate positions or fill order books are offering around €650pt delivered while others are indicating speculatively high as they seek to hold on to product amid expectations of further price increases.

In the UK, importers have increased AN prices by £20pt from last week to £750pt delivered farm. Further price increases are widely expected. CF Industries is understood to have withdrawn from the market and is not taking any new sales orders.

The Dutch TTF gas price climbed over €180/MWh by mid-week, equivalent to over $50/mmBtu. The strengthening of the US dollar against the Euro has significantly reduced the US dollar production cost per mmBtu. However, it remains at historic highs. 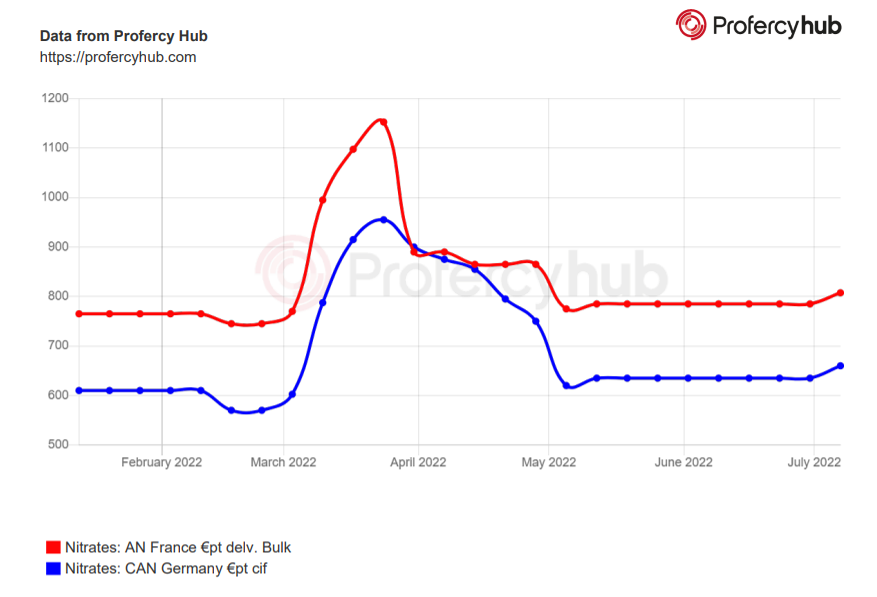