The Profercy World Nitrogen Index (PWNI) has rapidly ascended this week, climbing to over 300 points, as nitrogen values continue to firm amid increasing concerns over future fertilizer production in Europe.

With Dutch TTF gas prices trading around €200/MWh over the past week, European fertilizer producers continue to weigh up the profitability of running operations. Further cutbacks are increasingly likely, and concerns over future supplies has led to European buyers now paying ever higher prices for urea. High nitrates values are also encouraging these users to switch to urea, further bolstering demand in Europe.

In northwest and eastern Europe, granular urea has been trading at increasingly higher levels, allowing traders to place positions from North Africa, and also drawing in volumes from long haul destinations, such as the Middle East and Southeast Asia.

Fob values have climbed higher in all major regions this week as a result. In the Middle East, granular urea for October shipment was sold at $660pt fob, a $45pt increase from last done business. While in the offseason US Gulf, Nola barge values also made strong gains with the market tracking international sentiment.

Last week, Egyptian producers committed over 120,000t of granular urea to traders for both August and September shipment to Europe. These back-to-back sales saw prices rapidly ascend by $115pt fob to $765pt fob over the space of a few days. While activity has slowed down from the region this week, some producers report they are now receiving bids in the high $700s pt fob for September shipments, an increase of $15-25pt fob from last done business.

With major importers still yet to fully engage with the market, and a further Indian tender likely to be announced this month, suppliers with volumes in hand remain confident regarding the future market direction.

Owing to the strong gains across urea fob markets this week, the PWNI has advanced by 25.46 points to 300.42 this week, the largest increase seen by the Index since March. 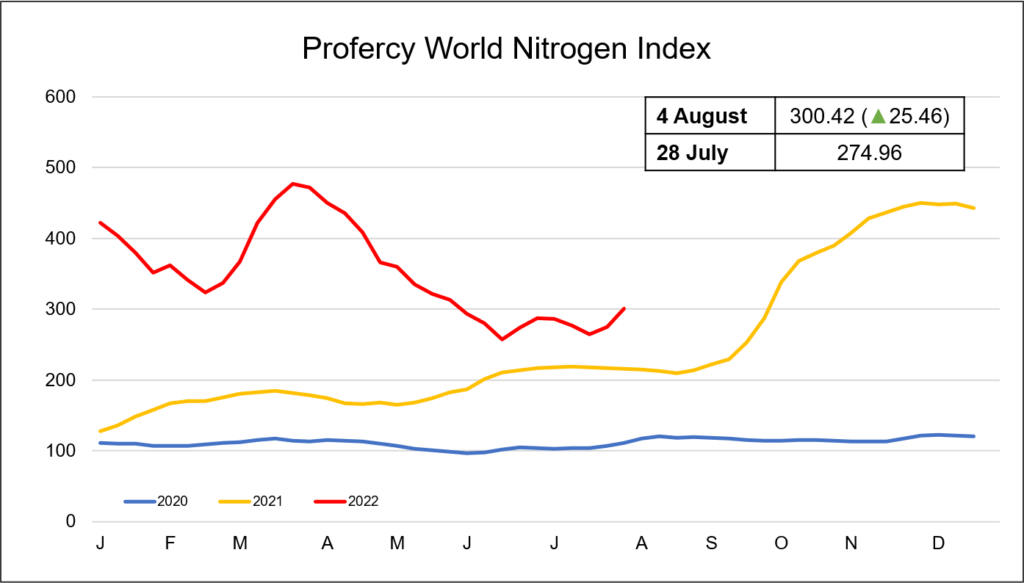