The latest customs data from China has revealed that urea shipments are now starting to grow. Although the export controls that were introduced by the government in mid-October 2021 had previously reduced export business to negligible levels, the data has shown that urea exports during the third quarter are now at the highest levels seen so far this year. This comes as no surprise given shipments committed in recent Indian purchasing tenders.

As alluded to earlier, the vast majority of shipments this year have been to India, with 529,000t exported there from January-September. Notably, the bulk of Indian shipments have consisted of prilled urea, which is unable to move in large volumes to other markets.

Around 301,000t has been shipped to South Korea during the first nine months of the year, while 255,000t has also been exported to Pakistan under earlier government-to-government business this year. 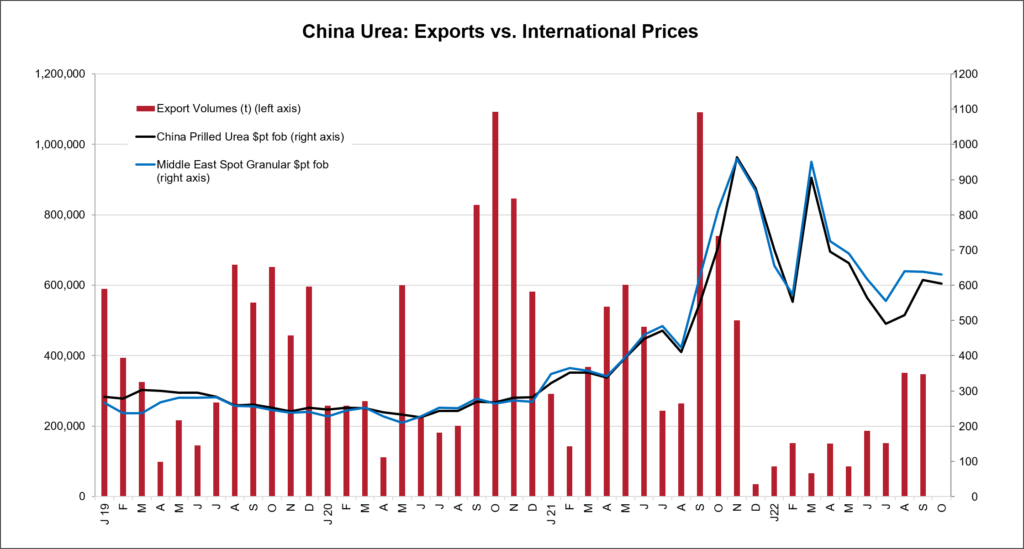 However, year-to-date urea exports are down some 60% compared to the same period last year, owing to the aforementioned export controls. Exports from January-September totalled 1.57m. tonnes, versus 4.02m. tonnes during the same period of last year, and 2.93 during the corresponding period in 2020.

While Chinese urea exports are nowhere near the levels seen in previous years, Chinese material has had a significant role in influencing international urea values. Indeed, Chinese material has been offered at some of the most competitive levels in recent Indian purchasing tenders. In the most recent IPL India purchasing inquiry (for shipments to 5 December), up to 320,000t is due to be shipped via 5-6 trading companies. Netbacks in the mid-$620s pt fob were well above returns in the domestic market.

Further, the lowest export prices seen in the urea market lately have been for small volume shipments ex-China to nearby markets, such as to South Korea and Southeast Asia.