The conclusion of India’s recent purchasing inquiry resulted in 1.47m. tonnes of urea being booked for shipment by 22 December. The volume was higher than most expected to be booked prior to the tender. The greater volumes were likely triggered by the competitive price. Indeed, the tender solicited the second lowest offer levels since July 2021.

The NFL tender was the third purchasing inquiry held in as many months by India, and despite this inquiry removing considerable volumes, it has failed to lift sentiment across the global urea market due to the lack of demand in any other major market.

With demand lacking from elsewhere, suppliers from Nigeria, Algeria, Egypt and, to a lesser degree China, were willing to sell at fob levels close to the lows seen during Q1, prior to the surge in values that followed the onset of the Russian-Ukraine conflict.

Offtakers of Middle Eastern material also chose to focus on India, as opposed to committing shipments west. Indeed, Profercy estimates that the majority has been supplied from the Middle East, with up to 500,000t expected to be committed from there.

While Egyptian producers had previously shunned the Indian business in favour of targeting the premium European market, a persistent lack of buying interest from the continent has resulted in the premium being significantly eroded. European premiums are at best around $30pt above netbacks from India, but crucially do not offer the same level of liquidity. Indeed, two large volume cargoes have been committed to India ex-Egypt under this inquiry.

For the moment producers have some breathing space, at least until end-December shipments come into focus. This could lend stability to the market albeit at the expense of activity. On the other hand, importers in most other markets including the USA, Brazil and Europe have remained on the sidelines and are in no rush to take length.

Owing to the downward correction in global urea fob values to largely reflect netbacks from India, the Profercy World Nitrogen Index fell 3.29 points lower to 271.76 this week. The Index has declined by nearly 24 points over the past two weeks. 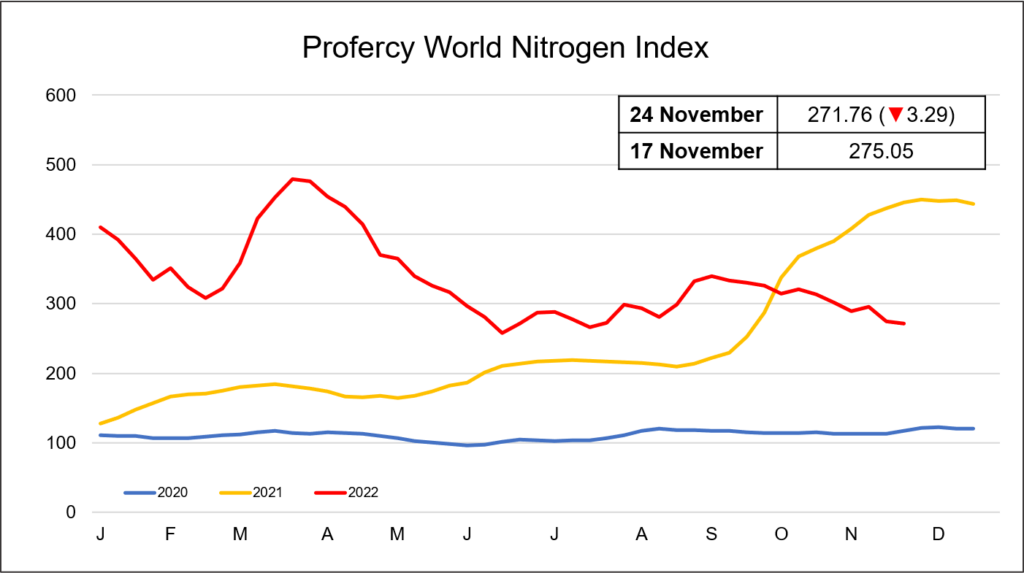