After a sustained period of illiquidity or interest in end-December or January material, distributors and domestic producers revised UAN offers lower in order to secure sales. Offers along the Ohio River fell to $520-530ps ton for near-term product, while sales in Cincinnati were heard down to $510-515ps ton ex-tank. Prior to this, suppliers had been achieving around $60ps ton higher.

While UAN still maintains a premium over urea on a price per ton of product basis, that premium has now been reduced following the latest price move.

This recent price correction is unsurprising owing to the extent of earlier price declines in the urea market. Whilst Nola barge values have stabilised of late, they have come under sustained pressure during Q4.

Indeed, while Nola urea barge values hit $710ps ton fob Nola at the beginning of September, the market has continued to experience weak demand since then. This in addition to the bearish international urea markets led to urea barge values declining to $450ps ton fob Nola by late November. Values have ticked slightly higher since then, however, the market continues to suffer from a lack of liquidity as year-end approaches.

Although the US UAN market has now reacted to the declines seen in the urea market, many suppliers believe that the UAN interest will pick up again as purchasing for the Spring months comes into focus. This is primarily given the extent of UAN exports this year, as well as the slow pace of imports. Indeed, US UAN markets are limited to imports from Russia and domestic production not exported to Europe. Other traditional suppliers such as Trinidad have been focusing exports on Europe where premiums have been significantly higher.

In October, US UAN exports hit a monthly record high of 335,000t. Whilst from July through October exports were at 943,000t, around 700,000t higher than the same period in 2021. The scale of shipments was in response to the sharp cutbacks in EU regional production, as well as the high returns available to US producers in the export market. Meanwhile, UAN imports from July-October totalled 632,000t, 310,000t below exports during the same period, according to US customs data.

The significant net supply deficit is likely to sustain UAN prices during the seasonal demand period. The extent of the support however will likely be dictated by the urea markets. For now, the prognosis for international urea markets appears bearish. 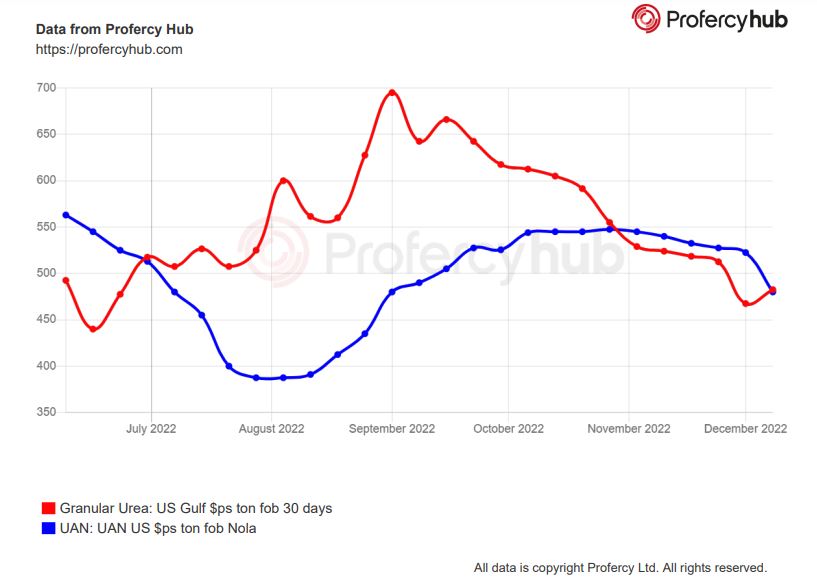