The 2020 Crisis and the Urea Market

Do past events match the current crisis? Amidst the turmoil of the Covid-19 pandemic and the partly related oil price war, forecasting commodity prices with any great degree of accuracy is a task fraught with uncertainty. In terms of running comparisons with the 2008/09 financial crash, there are some marked differences. 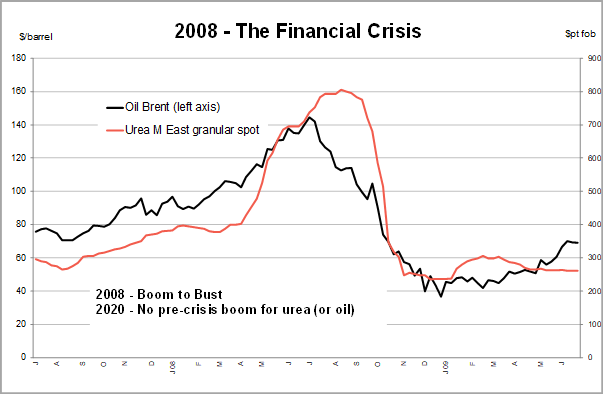 Prices for oil and urea were clearly nowhere near the exaggerated peaks of 2008. There has been no commodity boom in the period leading up to the current crisis.

In 2008, the huge run up in urea prices was sparked by the introduction of a Chinese export tax in April of 135% prior to which the market had been drifting. The following months saw huge advance buying by importers worldwide, fearful that China’s export absence would leave the world short of urea. This activity stalled in August with importers and distributors having over-stocked/over-ordered and producers suddenly facing a dearth of inquiries for product that had no place to go.

Unlike in 2008, there has been no such supply shock or bout of panic buying in the urea market this year to date. This is reflected by the fact that, while urea prices improved from $228pt fob at the end of January to around $260pt fob Middle East in first half March, this has been largely for seasonal reasons. During February and first half March buyers moved for supplies after deferring purchases in Q4 2019. The absence of China as a major supplier in Q1 has been an issue, but the volumes previously forecast were not expected to be large in any case due to low operating rates in January/February, low urea prices and preparations for the spring season in China.

As regards China, there has certainly been no panic buying of urea in recent months as the pandemic has developed. Indeed, even though China saw domestic prices advance until dropping back, the increases were not large. Chinese urea operating rates have now increased to over 70% (160,000t/d) to meet demand for spring and exports will no doubt emerge, especially when this demand is covered. On the positive side, recent buying by major markets has been insufficient to create huge stocks that would carry past the current application season.

×
Before you leave...
Would you like to download a free copy of our reports? We have a free sample of each report for you. You can also take a 2 week free trial to see the value we deliver.