Profercy’s latest long term price forecast, The Urea Outlook to 2030, was published in October 2016. While the latest report looks to the future, this article provides an overview of price developments since 1970, as well as the factors that have contributed to the five year price decline across global nitrogen markets.

Urea accounts for over 70% of all nitrogen applied as fertilizer or used industrially. In the past 10 years, World production has grown by 30% with half of this increase taking place in China.

Demand for urea has also grown rapidly in the past 10 years. China itself has increased consumption from 36m. tonnes in 2006 to 61m. tonnes in 2015, albeit well below its rate of industry expansion. Indian demand has grown from 23.5m tonnes to 32.5m. tonnes in 2015 without any notable additions to capacity. 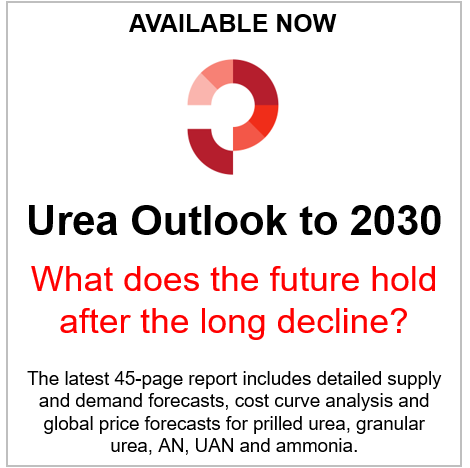 The development of urea prices since 1970 is outlined below with key influences noted. During the low-price period of 1999-2004 investment lagged and huge swathes of capacity were closed. Thus, as demand began to grow in the middle of the last decade, the industry was ill-prepared to meet the challenge. Prices first rose in 2005 with Indian imports beginning to build. The position for buyers was made more difficult in 2006 with the ethanol push in the USA that guaranteed a solid immediate future for both corn and urea prices.

The period from 2006 to 2015 has been one of unmatched volatility with the 2008 boom and then crash the most notable period. Prices recovered from 2010 to 2012 buoyed in part by lower Chinese exports (a still restrictive export tax regime was in place).

2013 through 2016 have been bearish with each successive price peak below the previous high and average prices trending down. Absorbing Chinese urea has been difficult as the country has shifted away from a punitive export tax policy which used to apply mainly to the first six months of the year. This year’s tax is just Rmb 80pt and this is expected to be removed entirely in 2017.

2016 onwards…where next for urea prices?

In Q1 2016, urea prices fell to their lowest levels since 2009. As is usual, no one factor has been responsible for this year’s market malaise with a mixture of macro-economic and urea specific factors in play.

Low gas prices have reduced the levels at which marginal producers stop production while 2016 has seen a number of notable supply additions in North Africa, the US, Malaysia, Iran and the FSU.The additions to capacity have been set against a fairly drab demand background with buyers prepared to wait until last minute before purchasing and then only acquiring the bare minimum. There has been no interest in stock-building at any time since April with importers and distributors unconcerned about the emergence of any shortage.

After an uninspiring Q1 which saw prices briefly move up on the back of last minute buying for Europe and the USA, Q2 brought the usual negatives with the buying vacuum left by those two areas/countries unfilled by Brazil, India and other major markets.  Middle East spot prices fell from close to $230pt fob to a low of $180pt fob in July.

While unwelcome for suppliers, the price slide into July has had a positive effect in some respects. China, so often the problem supplier in the market, has proven largely uncompetitive and operating rates across the industry have dropped to historically low levels of 55-60%. Old plants are being closed permanently and the government is now set on industry contraction. Reductions in Chinese exports have been matched largely by expansions elsewhere. However, despite this China has set a floor for prices in 2016.

What lies ahead for 2017 is covered in Profercy’s latest long term report – Urea: The Outlook to 2030 – What does the future hold after the long decline? However, the expected developments of July 2016 to end June 2017 strongly suggest that this 12-month period will be pivotal for the urea market in that it will mark the end of the long price downtrend.

The Urea Outlook to 2030: What does the future hold after the long decline?

For more information on Profercy’s latest long term nitrogen market forecast, please use the sign up form below. More information regarding the report is also available here.

×
Before you leave...
Would you like to download a free copy of our reports? We have a free sample of each report for you. You can also take a 2 week free trial to see the value we deliver.