Over 3.6m. tonnes of urea were offered in India’s latest purchasing tender which closed today, volumes that are understood to have set a new record.

Although significant double counting is likely, the volume offered remains considerably higher than what was offered in most recent inquiries. Since April, the average volume offered has been just below 1.9m. tonnes.

The last time India received offers totalling over 3m. tonnes was in November 2019, when 3.16m. tonnes was put on the table. The urea market softened in the immediate aftermath of the mammoth volumes being offered, however, prices soon recovered when 1.76m. tonnes was booked.

The news comes ahead of a number of imminent sales and purchasing tenders in the urea market. The outcome of these tenders is likely to be defined by events in India over the coming days.

BCIC Bangladesh closes two purchasing tenders for 50,000t each of bagged granular urea on 12 October. Omifco has called its first sales tender for granular urea with two 45,000t cargoes to be sold, also closing on the 12 October.

Ahead of today’s RCF tender, Kaltim Indonesia tendered for 45,000t of prills for October shipment. The highest bid received was $8pt below the reserve price of $270pt fob and private negotiations are now expected to take place.

Overall, it has been a lively week in the urea market. Producers in the east sought to raise prices ahead of the Indian inquiry and following a high priced sale in the Middle East over $270pt fob. This included those in China who were out of the market for most of the week due to the Golden Week holiday. However, early reports imply that Indian netbacks will disappoint and not support these higher offer levels.

In the west, Egyptian granular values stepped up by $2-3pt. Brazilian buyers raised price ideas by $5pt for October shipments, this despite news that 980,000t of urea arrived in Brazilian ports September.

However, gains were not realised in all regions. Indeed, Black Sea prilled urea values declined by $5pt as traders moved to secure volumes for India.

Little business was heard taking place elsewhere in the urea market and the Profercy World Nitrogen Index has seen little change as a result, edging up 0.86 points to 114.70 this week. 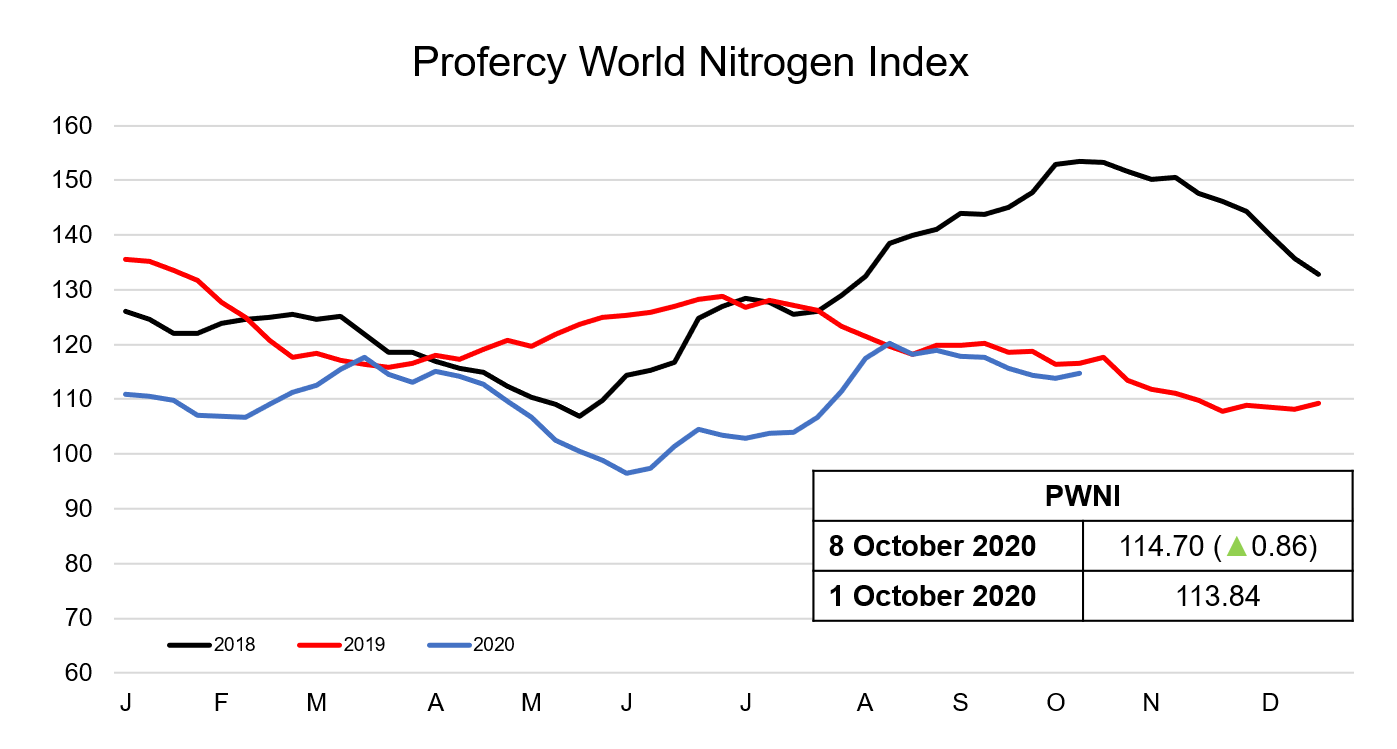 The Nitrogen Index was stable ahead of the latest RCF inquiry.