Urea imports to Brazil this year are set to surpass volumes imported in 2019, with better demand this year to grow owing to good farm economics in the country and shutdowns of local production.

Latest customs statistics show that the Latin American country has imported 2.66m. tonnes between July and October this year, up from 1.76m. tonnes during the same period in 2019. Indeed, Brazil only needs to import a further 443,000t in November and December to match the total imports seen during the second half of last year. 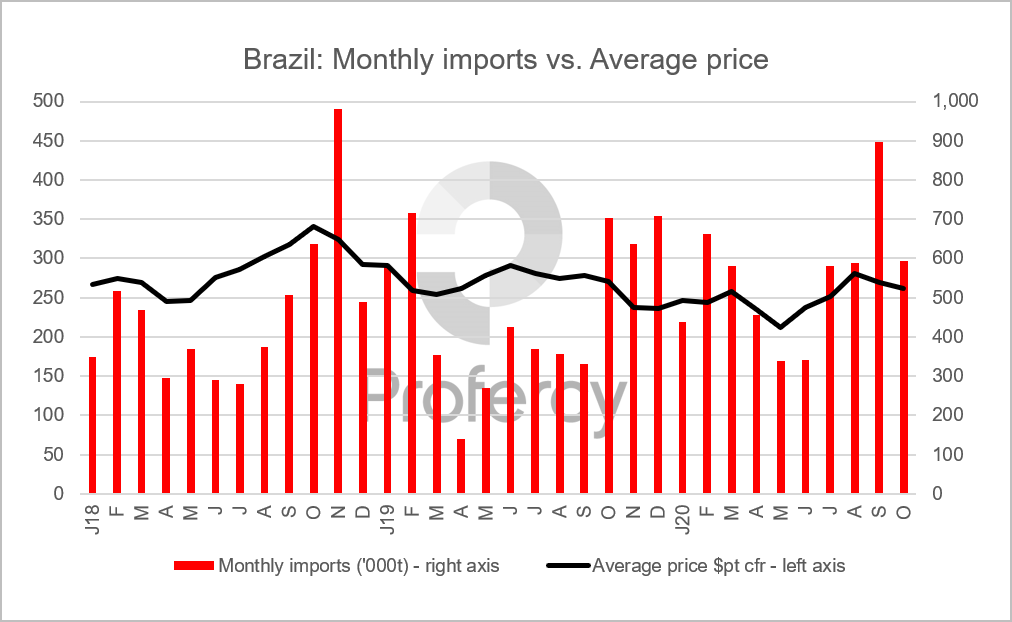 With around 500-600,000t of urea expected to arrive in November and a similar volume in December, total imports this year are set to surpass 2019 by over 1m. tonnes. Year-to-date imports to the country currently stands at 5.48m. tonnes, marginally lower than the 5.59m. tonnes imported during the whole of 2019.

Brazilian urea imports surged in September this year to 898,000t, this owing to a price rally that began in mid-July and concluded mid-August with business taking place in the $280s pt cfr. Imports during July-September were 901,000t ahead year-on-year as a result, boosted by the significant arrivals in September.

Following the September arrivals, cfr values unsurprisingly weakened. With ample urea availability , buyers have been in no hurry to make further purchases. This kept the pressure on suppliers, forcing them to compete for business. Following the highs of mid-August, prices have since shed around $20pt.

The increase in urea flow to Brazil is also due to domestic production halting. In January this year, Petrobras decided to idle its loss-making ammonia/urea complex (640,000t/y prilled urea capacity) at Araucaria, Parana State. All three of the company’s urea units remain closed.

The Fafen-BA, Bahia and Fafen-SE, Sergipe units were also previously mothballed, with the last of the units ceasing production in January 2019. The country has had to increase its reliance on urea imports since then.

While an increase in buying activity is usually expected towards the end of the year, ahead of the Safrinha season, Brazilian buyers remain in a strong position in terms of existing stocks. It is therefore expected that buyers will temper buying to avoid any potential upwards movement in prices for the rest of the year.