After a rampant start to the year, activity in the global urea market has been significantly slower this week.

In the West, values in the US Gulf barge market fell further with a handful of sellers entering the market again and lowering offers to place February and March barges. This resulted in values declining by around $20ps ton over the course of the week.

In Brazil, buying interest waned as the week progressed. Importers have been cautious given the declines to US values, and while no new business has taken place, offers have been holding steady for now at around $390pt cfr.

In Europe, freezing temperatures have hindered business on the most part, with good buying demand only seen from Italy and in Turkey this week.

This has had an impact in Egypt, where producers have been unable to negotiate new business at higher levels. Granular urea values from the country have seen rapid increases since the beginning of the New Year, with last done business for April volumes concluded two weeks ago. While producers remain hopeful the next round of business could take place at improved prices, there has been little buying interest with traders currently focused on executing earlier business and placing positions.

There has also been little activity in the Middle East this week. Producers remain in a comfortable position having committed volumes well into March. While, in the Far East, activity has slowed significantly ahead of the Chinese Lunar New Year break. Of note, the first cargo of Chinese granular urea to be committed to Brazil since 2015 was fixed this week.

In spite of the slowdown in activity in the urea market, other products across the nitrogen complex have continued to advance. AN and amsul prices are firm, while the Atlantic UAN market is tight. This has resulted in the Profercy World Nitrogen Index increasing by 3.76 points to 170.34 this week, to levels last seen in January 2015. 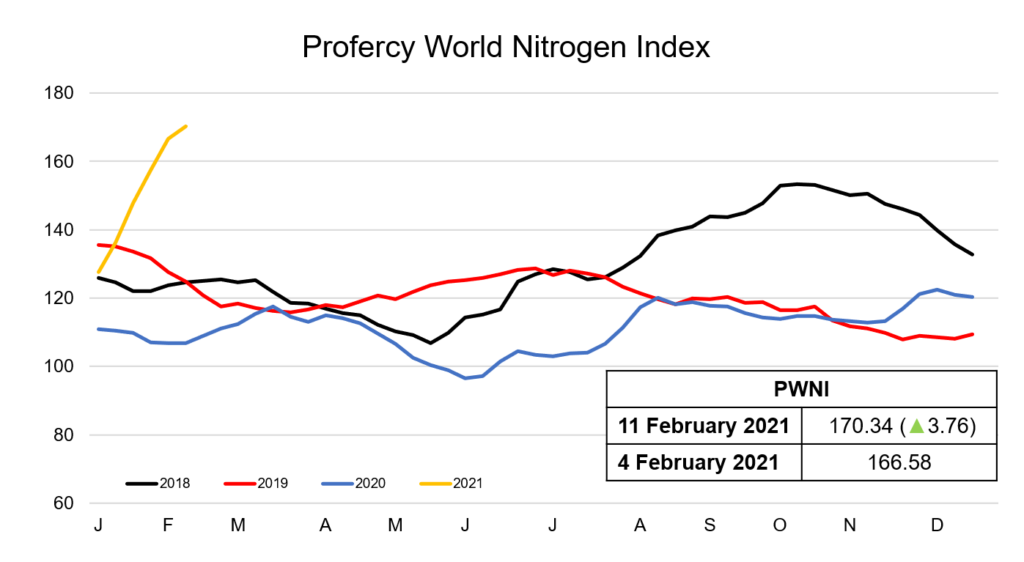