After weeks of consistent increases, the Profercy World Nitrogen Index has dropped 3.06 points to 181.47 this week, the first decline seen this year owing to softening urea values, particularly in the east.

Activity in the global urea market has been muted for the most part, with participants awaiting the outcome of India’s urea purchasing tender following a three-month absence from the market.

The tender closed on 22 March, with the state purchasing agency RCF being offered 1.92m. tonnes of urea. The lowest offer was received on the east coast at $379.87pt cfr, and the west coast at $380.18pt cfr.

Following the issuance of counters offers at the lowest offer levels above, RCF today received acceptances for just over 1.3m. tonnes of urea, higher than had previously been expected. The vast majority of this is due to be supplied from China.

While the acceptances are slightly above what RCF was expected to secure, given the slow pace of Indian imports in Q1 and the fact that domestic sales are running well ahead of production, India will need to actively import in Q2 with further volumes required in May and June.

Owing to the lack of activity in the urea market away from India, prices have softened across a number of regions.

In the Baltic, prilled urea values have decreased substantially as producers with product have had to lower expectations to secure orders. While in the Middle East, fob prices have declined basis latest possible business in India, with netbacks for vessels to the west coast now in the mid to high-$350s pt fob, down from the mid-$360s last week.

The Indian east coast counters offer returns in the low-$350s pt fob for 50,000t shipments from China. However, with domestic business slow and prices lagging export values, there has been notable producer and distributor interest in supplying in this latest tender, and hence why Chinese urea is featuring heavily this time. Southeast Asian urea values have also come under pressure of late.

The exception has been in the US, where in the latter half of the week more buyers entered the market in search of prompt material. Recent bad weather in the Nola region has delayed the transfer of product onto barges from vessels that have arrived, and with further March arrivals also faced with similar delays, a sudden increase in demand appeared for prompt material. Offers quickly advanced and March went on to trade at a new high of $405ps ton fob Nola.

With the Ever Given continuing to block the Suez Canal, some scheduled contract urea shipments for the US are now likely to be faced with delays. High tide is expected in the area tomorrow and some remain hopeful this will help to refloat the vessel, however, should this fail, fears are growing that it could take weeks for the 200,000t ship to be moved.

There is evidence of urea vessels already en route to the US being impacted by the canal closure. This includes a vessel from Saudi Arabia which is believed to contain urea and currently south of Suez having departed Al Jubail fifteen days ago. Iranian shipments of urea to the Turkish market could also be heavily affected. 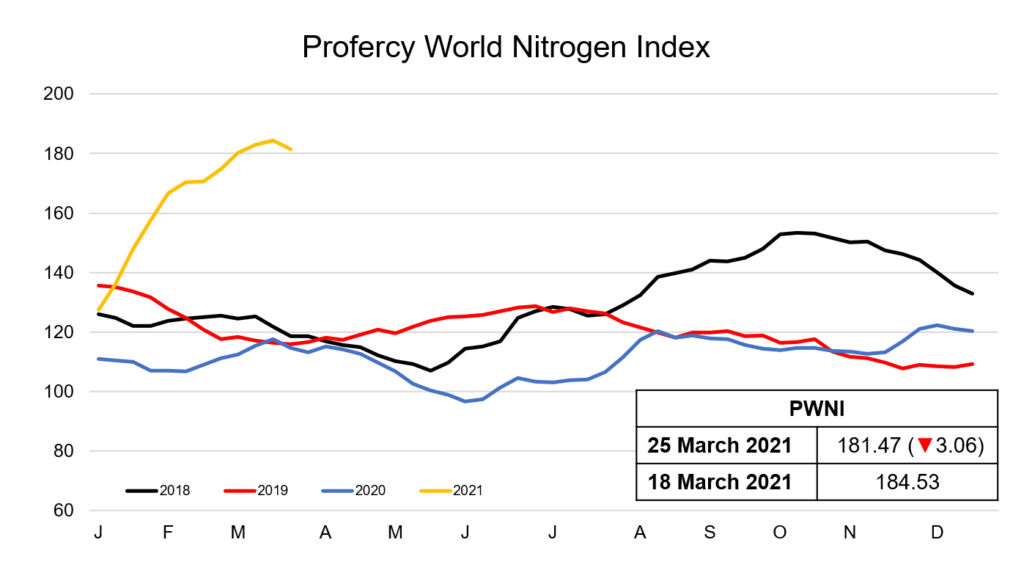