The Profercy World Nitrogen Index has hit a high last seen in March 2014 as global urea values no signs of slowing their upward trajectory.

Urea values continue to rapidly escalate. With traders now willing to book long positions further into July and August, producers in the east and west have managed to achieve higher prices. With India expected to enter the market once again to try to make up for the lack of tonnes booked during its previous two purchasing tenders, the bullish sentiment in the urea market looks set to continue.

In North Africa, fob prices stepped up by as much as $10pt with AOA, Kima, MOPCO, Abu Qir and Fertiglobe all making sales at levels last achieved in March 2014. Egyptian producers continue to benefit from solid demand from Argentina, where Profertil’s urea complex is on turnaround, and where Egyptian product benefits from a duty advantage.

Chinese producers and suppliers continue to show little interest in exporting, with values in the domestic market remaining firm and inventories slim. As a result, export offers advanced with prilled urea quoted over $400pt fob. This has benefited other suppliers in the east with those in the Middle East able to conclude business above prices achieved in India late last week.

Heading west, urea values in the US Gulf significantly increased this week and also hit multi-year highs. Demand for prompt barges has resulted in a supply squeeze and 1H June barges traded up to $430ps ton fob Nola. With corn prices remaining at healthy levels and the international urea market firm, offseason values have also been high. Notably, Q3 barges changed hands up to $405ps ton this week, a $441pt cfr equivalent.

Values in Brazil have increased at a slower pace than the wider international market. However, there have been signs of improvement in the past 24 hours. July derivatives contracts have traded as high as $465pt cfr for July, up more than $30pt on levels earlier this week.

Owing to the strong gains seen across the global urea market, the Profercy World Nitrogen Index climbed 4.50 points this week to 186.56. This is the highest point seen this year, and now at levels last seen in March 2014. 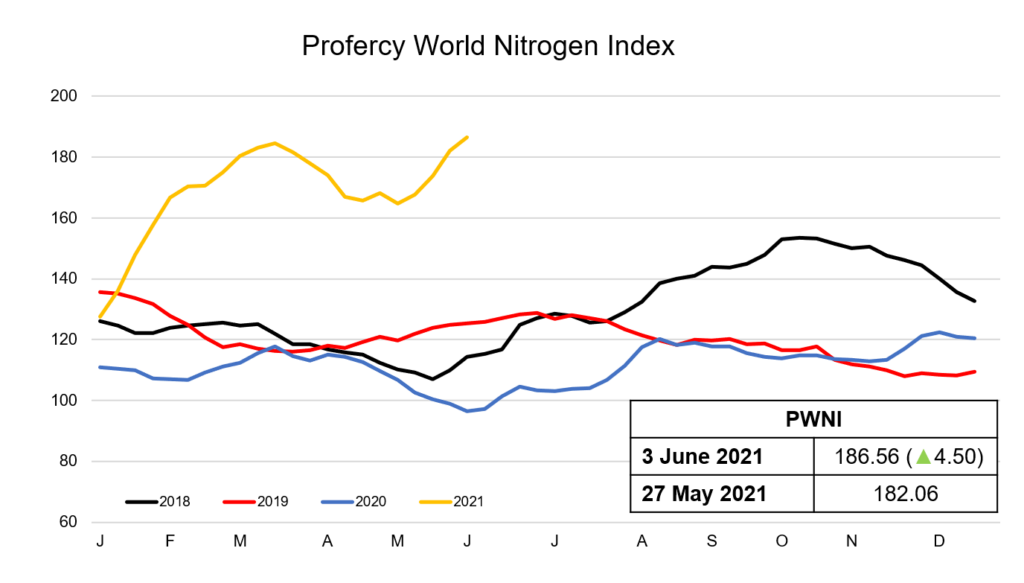 Sharp gains in Egypt and AG drive PWNI up by over six points
May 21, 2021
Leave Comment