Following the conclusion of its latest purchasing inquiry, India’s IPL has this week secured 1.6m. tonnes of urea for shipment by 31 December. By offering substantial premiums to netbacks from other markets, India has managed to attract the bulk of the remaining spot availability there is in the market for December.

In the latest tender, volumes were committed at the IPL counter prices of $981.64pt cfr west coast, $998.50pt cfr east coast and $959.06pt fob. These counter prices offered record netbacks for all, resulting in major commitments from regular suppliers (Middle East, Egypt), but also attracting notable volumes from irregular suppliers, such as those in the Baltic and Nigeria.

The bulk of the volumes will be supplied from the Middle East, with over 700,000t committed by producers and traders with positions. With contract offtakers from markets such as Australia and SE Asia willing to skip shipments, this has allowed greater volumes than were initially expected to be shipped from the region at high netbacks of over $950pt fob.

While in Russia, in spite of export quotas being introduced, as many as seven cargoes have been sold from both Baltic and Black Sea ports for India. Although Baltic suppliers usually tend to skip Indian business in favour of western markets, netbacks over $70pt above those possible in western long haul markets unsurprisingly led to major sales.

A further 300,000t of North African material has also been sold via traders and producers, and up to two vessels will be supplied from Nigeria.

Notably, with Chinese export business limited to material ex-bonded warehouse, producers globally remain confident of achieving high prices for the next round of business.

Although the volumes secured by India in the most recent two purchasing inquiries has provided them with some breathing space, the country is still short and will need to return again. A tender for January shipments is widely anticipated.

With bullish sentiment ever present in the urea market, the Profercy World Nitrogen Index has advanced 8.92 points to 437.08 this week. 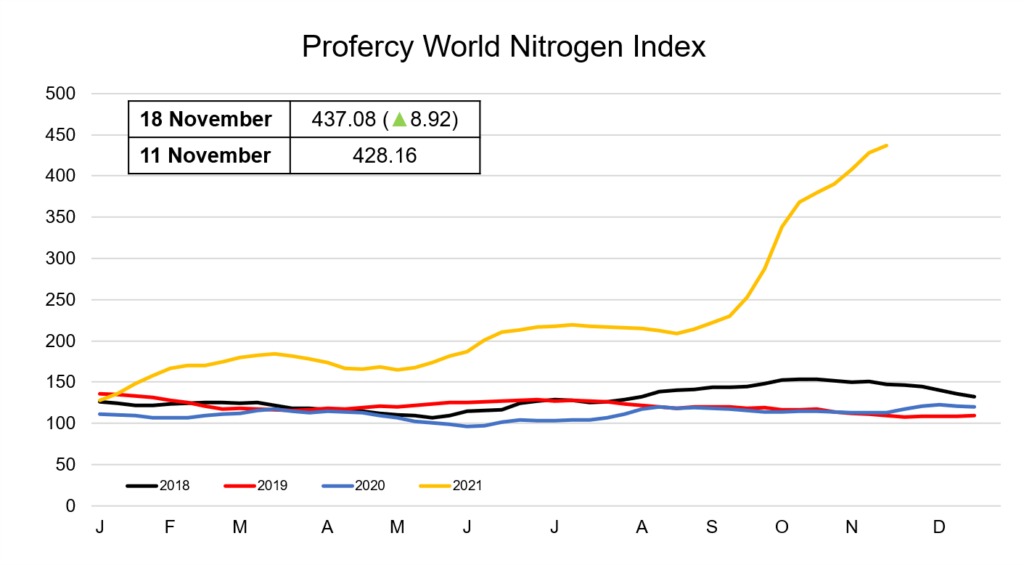