Spike in AN and ammonia prices lifts PWNI values even higher

The Profercy World Nitrogen Index has climbed by 8.22 points to hit 445.30 this week as urea values largely held on to their post India price increases. Indeed, the gains have been the result of a surge in international AN values on the back of the Russian export quotas and even higher ammonia price increases this week, with Black Sea ammonia now just shy of $1,000pt. The Index has now advanced by over 200 points since late August.

Activity in the global urea market was notably slower this week, however values are holding firm. Many participants have taken a step back following the latest Indian urea purchasing tender which saw the majority of December availability across all major supply regions, including the Baltic, absorbed by the world’s largest importer.

With producers in a relaxed mood and traders having cleared most of their December positions, there was little appetite to push ahead with negotiations for the next round of business.

Furthermore, with several reports suggesting that India could be back in the market with a fresh purchasing tender in early-December for shipments to load by mid-January, many suppliers seem content to wait for the opportunity to offer into the premium market.

Small sales were heard taking place in Europe this week, with buyers accepting up to $960-970pt cfr for small sized cargoes in southern-Mediterranean markets.

Meanwhile in SE Asia, a 10,000t prilled urea cargo was sold from Indonesia at a reported price of $1,000pt FOT ex-works to a buyer in South Korea. The absence of China from the export market has caused major challenges for importers in South Korea of late. This has resulted in regular inquiries from the country, with buyers left with no choice but to pay higher prices in order to source whatever product is available.

The government intervention in local markets remains a focal point for both suppliers and buyers of nitrogen-based products. In China it appears export controls will not be eased any time soon, while Egyptian producers are also currently reviewing revised domestic quotas set by their government.

Formal export quotas were issued by the Russian government today, with the export allocation for urea set at 4m. tonnes, UAN at 1.15m. tonnes and AN at 744,000t, for the six-month period starting from 1 December. The allocations are largely in line with expectations, with AN facing the biggest restrictions.

With global supply increasingly limited, the current bull-run in the market is yet to show signs that it is coming to an end. 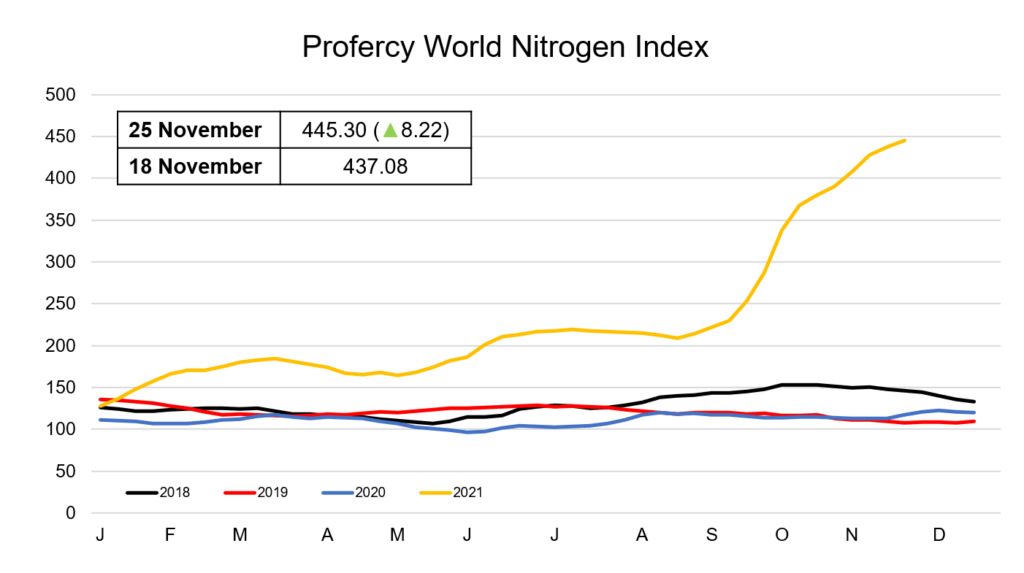