The Russian export quotas, confirmed at the end of November for nitrogen fertilizers, have in effect only targeted ammonium nitrate.

On 3 November, the Russian Prime Minister, Mikhail Mishustin, announced on state-owned television that temporary export quotas on nitrogen fertilizers will be introduced for a period of six months. At the time, Mishustin said that the export quota for all nitrogen products would be 5.9m. tonnes in total. The news followed several weeks of rumours about export quotas and unofficial warnings from state officials to Russian producers to prioritise the domestic market over exports.

Indeed, producers did do this with export volumes not increasing significantly (in part due to weak Brazilian demand) in the weeks leading up to the export quotas. However, the wider global concerns about nitrogen fertilizer supply filtered their way into the Russian domestic market and during the second half of October there was in effect panic buying from distributors. This naturally led to supply shortages which only further fuelled worries about supply.

The vast majority of the domestic demand was for ammonium nitrate, by far the main fertilizer used in Russia. Indeed, the Russian domestic market consumes less than 10% of Russia’s nameplate urea output.

Based on this information, export quotas were allocated for each producer and each product.

In the document, issued by the Ministry of Industry and Trade to producers on 26 November, export quotas are broken down as follows:

Similarly, average UAN exports between December-May in the last three years were 1.10m. tonnes, almost in line with the export quota of 1.146m. tonnes for UAN. However, UAN exports have been declining over the last three years with 1.23m. tonnes of UAN exported during December 2018-May 2019 then 1.15m. tonnes from 2019-2020 and only 927,000t during 2020-2021. As such, similar to urea, the UAN export quota is in theory almost certain to have no major impact on export availability.

Brazil is the biggest importer of Russian AN with around 30% of the December-May exports (on average) being shipped to Brazil. However, the near-term impact of the quotas on the Brazilian market is likely to be limited given importers secured notable volumes earlier this year for the upcoming season. Indeed, January-October AN imports in Brazil were 1.35m. tonnes, higher than the 1.03-1.24m. tonnes imported throughout the whole year in any of the last three years.

Instead, the biggest impact will be felt by Central Asian (cross border) buyers including Kazakhstan and Kyrgyzstan.

In addition, the low AN quotas remove a potential alternative supplier for European nitrate markets. Despite Russian AN having a €32pt anti-dumping tariff in Europe, European production cutbacks and subsequent price increases opened up the opportunity for Russian AN into Europe for the first time in many years. 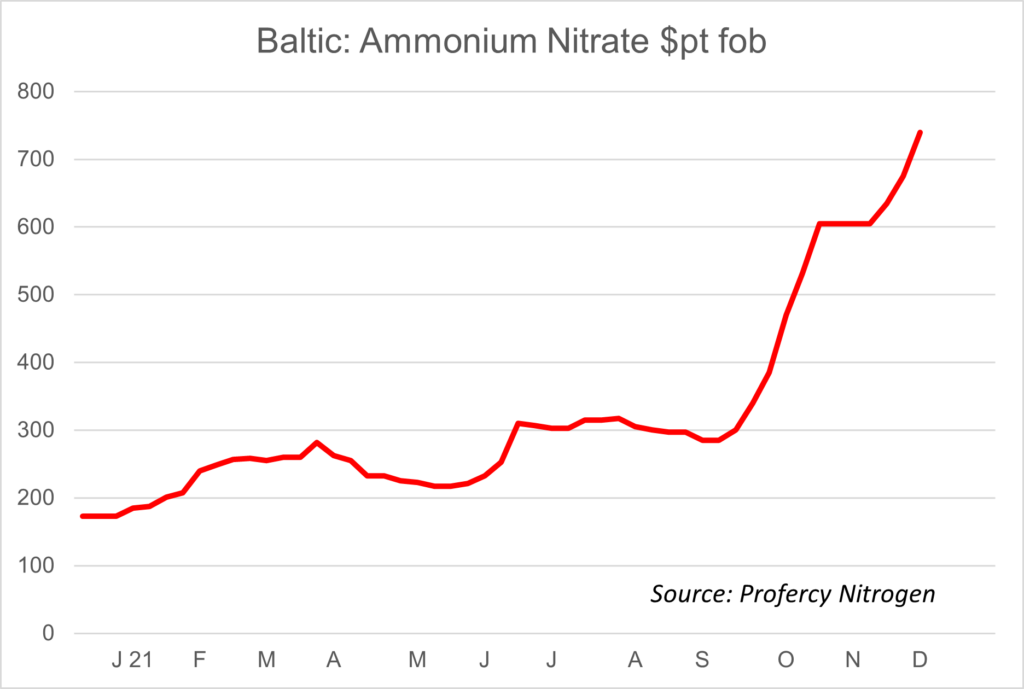 In terms of fob values, urea and UAN values have been unaffected by the export quotas as expected and have moved basis other factors. However, the impact on AN prices has been almost immediate with Acron selling a hold of AN for January shipment at $770pt fob, up $60-70pt on last done business a week earlier which in turn marks a $60-70pt increase on the previous value. As such, over the last two weeks, Baltic AN fob values have increased by an extraordinary $120-140pt, almost solely due to the export quotas.