The global urea market commenced this week in the very much the same fashion as has been seen since the beginning of the new year.

With sentiment weak, there was minimal interest shown from buyers to purchase new volumes, and many have opted to wait on the side lines. Meanwhile, producers in North Africa and Russia have struggled to find liquidity, and fob offer levels have been reduced weekly in an attempt to reignite buying interest.

However, with reports emerging late this week from India suggesting that IPL could announce a fresh purchasing inquiry as early as next week, producers now have a renewed sense of optimism that India could provide a major potential outlet for February into March shipments. It was previously expected that India would return to the market in late February.

Buying interest significantly improved shortly after this news, and producers in North Africa holding prompt tonnage have now been able to clear inventory, while traders have also been able to place January/early-February positions.

In Algeria, AOA made several sales to traders for Europe and long-haul markets, potentially including the USA. Most business has been reported at prices up to $620pt fob, and some as high as $640pt fob. Offers have since advanced further.

Having peaked at a high of $960pt fob in late December, Egyptian granular urea values, as well as those in other regions, have been on the slide since the beginning of the new year. Egyptian values tumbled to as low as $600pt fob earlier this week, with sales to traders taking positions. Liquidity was found at this level and more buyers have now subsequently stepped into the market to take volumes at higher prices.

Over 100,000t is believed to have been booked for end-January shipment onwards, including volumes sold by traders with positions. Latest business reported from the region today has taken place between $640pt and $700pt fob for February and March shipments.

With urea values sinking prior to the news of India’s potential return to the market, the Profercy World Nitrogen Index declined by a further 27.62 points to 351.67 this week. The Index has now lost close to 92 points since the beginning of the year. 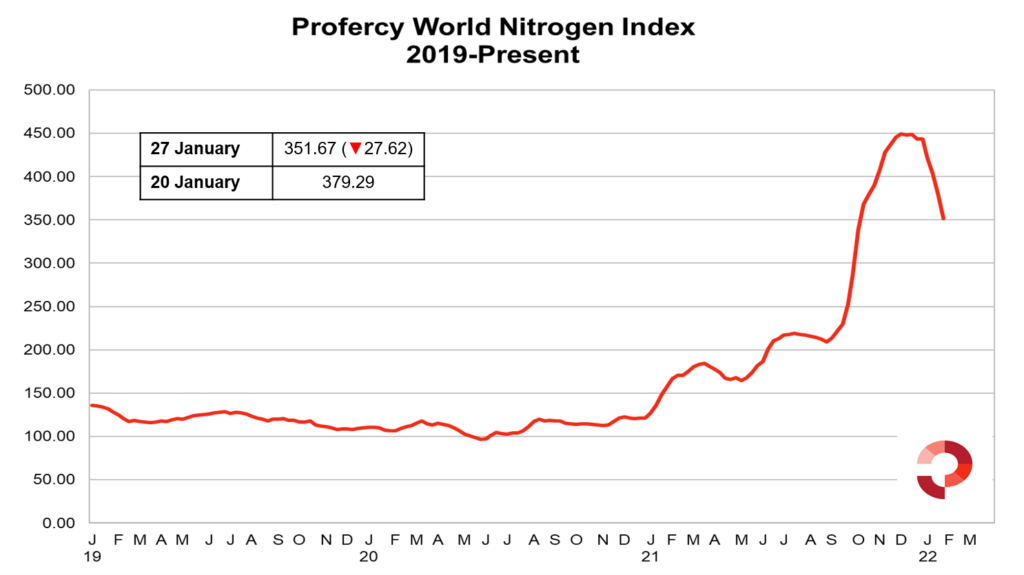