The long awaited Indian purchasing tender is finally nearing a conclusion. This week price details were announced with the lowest offers above $715pt cfr for the west coast and above $720pt cfr for the east coast. This has resulted in further declines in global fob values, but these have not been as sharp as some expected.

A sizeable 2.64m. tonnes were offered into the tender. While significant, it was less than the 3.19m. tonnes offered in the 7 February tender. In a break with previous tenders, India’s RCF took the unusual step of stating in tender documents that it has an indicative volume target of 1.5m. tonnes of urea. All product is required to be shipped by 5 July.

The tender was long awaited with ongoing reports of an imminent purchasing tender circulating from as early as late March. Since then, the global market has largely been static with no other major market actively buying. Europe is transitioning into the offseason and the US Gulf has disappointed in terms of demand. The Brazilian market is yet to get going and others in Latin America are sat on the sidelines.

With international prices soft, but at high levels relative to previous years, many in the market were looking to the latest Indian tender for some degree of price definition.

For suppliers in the east, primarily those in the Middle East, returns in the high-$600s pt fob appear favourable to what is achievable elsewhere, particularly for any cargo destined west. Chinese participation is set to be light owing to export controls, but prices likely acceptable to those holding product at the ports.

Western-oriented producers, such as those in Egypt, face a dilemma. Nearby markets have for a long time offered major premiums to long-haul returns, with granular business taking place over $750pt fob Egypt as late as last week. However, this business has slowed to a crawl of late and liquidity has been light elsewhere. West coast India netbacks are around $670pt fob Egypt and have been accepted for prilled urea. Granular producers are now assessing options.

Elsewhere, Russian ammonium nitrate suppliers entered the international markets as the domestic season concluded along with the export ban. As a result of the influx in supply, Baltic AN fob values tumbled, declining by up to $170pt down to $450pt fob. AN values had been holding at elevated levels due to the strict limitations on supply.

The Profercy World Nitrogen Index declined by 25.07 points week on week to 334.93 this week. The sharp decline is largely due to the major readjustment in Baltic AN values. 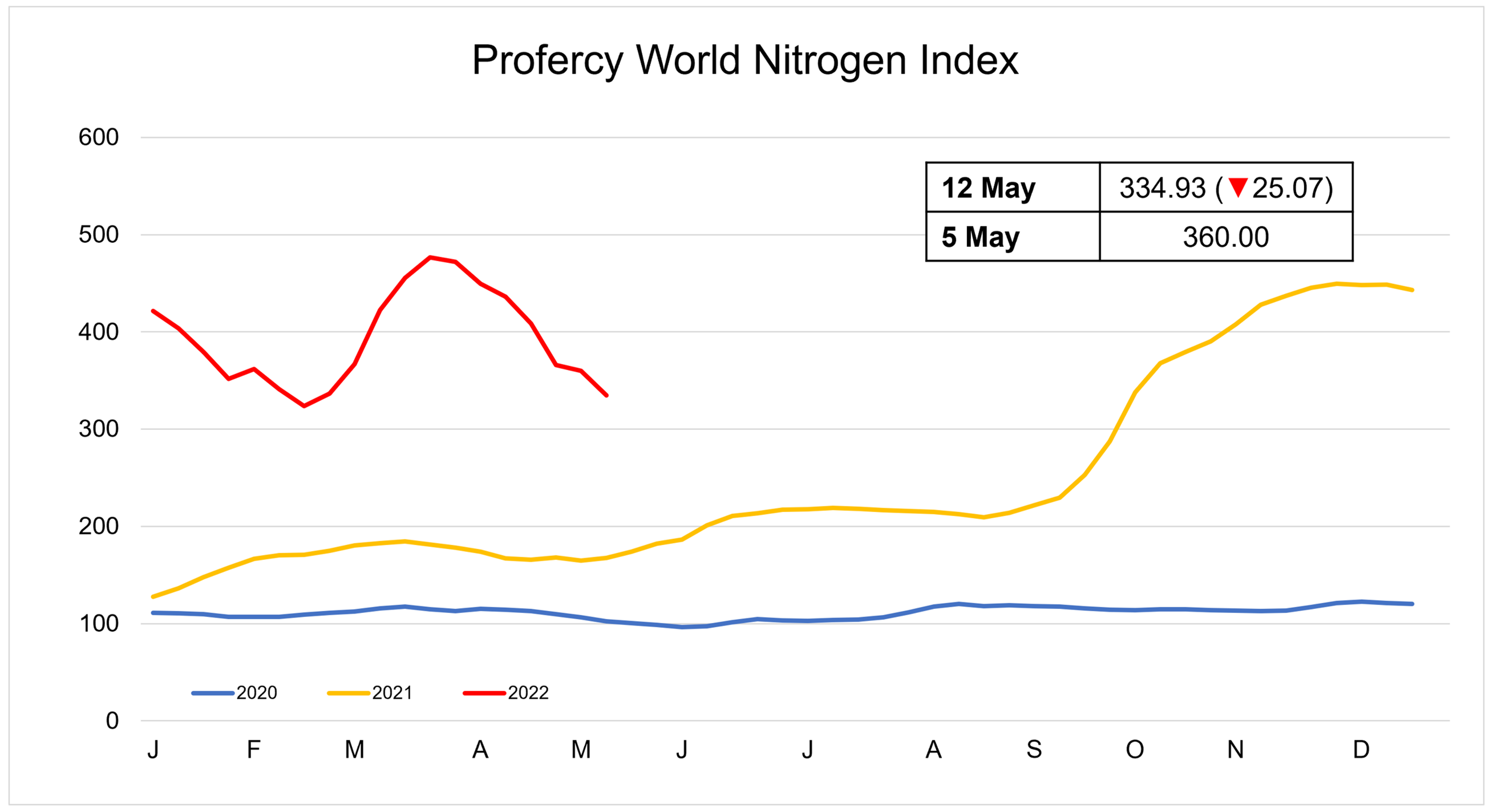